Entertainment   Bollywood  31 Jul 2018  Bharat: Salman had ‘taunted’ Peecee, but has something special to say about Katrina
Entertainment, Bollywood

Bharat: Salman had ‘taunted’ Peecee, but has something special to say about Katrina

The superstar has once again shown his soft corner for her, something he didn’t do for Priyanka Chopra or Disha Patani. 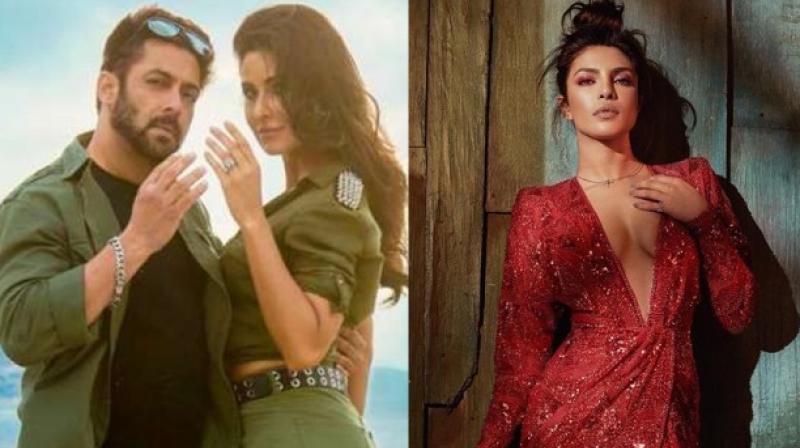 Salman Khan and Priyanka Chopra were set to collaborate after 10 years, before Katrina Kaif stepped into her shoes.

The 'Dabangg' star took to his Twitter handle where he posted a welcome note for Bollywood diva Katrina Kaif, who will be romancing Khan in the film.

Kaif has replaced Priyanka Chopra who exited from the project due to her reported engagement to her rumoured boyfriend Nick Jonas.

Interestingly, when Priyanka was signed for the film, Salman didn’t use words like ‘Sundar’ or Susheel’, he just light-heartedly taunted her, considering her Hollywood projects, that the film was in Hindi. In fact, he didn't even post her picture unlike this gorgeous one he tweeted of Kat.

And the next leading lady, Disha Patani, was also just welcomed normally, considering they might have met only few times till now, but her photograph accompanied the tweet.

Be it drinking coffee from the same cup at an event or setting screen on fire with their chemistry in ‘Tiger Zinda Hai’ or the recent Da-Bangg Tour, the superstar has once again shown his soft corner for Katrina with his latest tweet.

This movie is director Ali Abbas Zafar's third collaboration with Salman Khan after the 2016 film 'Sultan' and the recent 'Tiger Zinda Hai'.

'Bharat' is set to have a character-driven story spanning many time periods and will be shot across locations in Abu Dhabi and Spain, besides Punjab and Delhi in India.

Directed by Ali Abbas Zafar, the flick is slated to hit theatres on June 5, next year.