Entertainment   Bollywood  31 Mar 2017  We are addicted to the absence of absence, says Pooja Bhatt
Entertainment, Bollywood

We are addicted to the absence of absence, says Pooja Bhatt

Actor-director Pooja Bhatt talks about dealing with alcoholism, her reasons for walking out of marriage and other life choices. 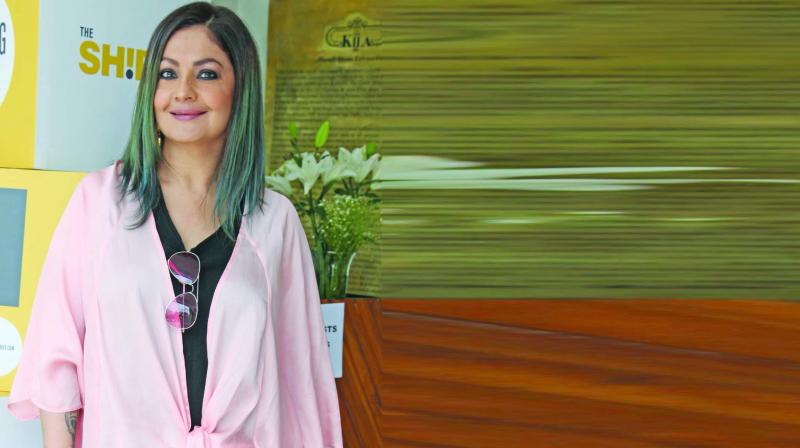 Power, determination and the unabashed guts to state a ‘spade a spade’ — actor-filmmaker-producer Pooja Bhatt is known for speaking the blunt reality of life. Whether it’s through her films like Dushman and Zakhm or her personal life, she did what she found right with conviction. In an interview, she spoke of the stigma of women alcoholism, walking out of marriage, having no children and more.

Alcohol addition
When you can ‘easily gulp half a bottle of single malt’ without feeling guilty, it’s time to pull the plug, states Pooja. “I have Scottish genes, my grandfather was Scottish. My father was a voracious drinker. So, drinking came naturally to me. It was Christmas when I finally decide to pull the plug. I sat with my four cats, put my phone on the silent mode, made myself dinner, toasted myself with a glass of water and went to bed,” shares the actress who was celebrating her 90 days of sobriety.
She further adds, “I quit drinking because I thought somewhere I had fallen in that trap of addiction and the only way to get out of it was to acknowledge it to myself.”

Societal stigma
Pooja points out the societal stigma associated with women makes them  brush things under the carpet. “I want to break the stigma attached to alcoholism in our country. Women particularly are discouraged from seeking help because it’s a matter of shame for the family. We don’t share our pain or frailties, we cover our weaknesses and it becomes a cancer. Also, people put up this facade that they are under control by saying things like ‘It’s socially acceptable’, ‘I am not that drunk’,” she explains. “It’s the absence of absence we are addicted to. All of us are somewhere lonely and have different ways to cope with it — for some of us it’s alcohol that provides solace.”

World — her AA group
She didn’t need to go to Alcoholics Anonymous (AA) as she had strong support systems, and speaking openly about the problem helped her overcome it. “To overcome any problem one must have to be real with themselves. I made the world my AA class. I have never been to any AA group meeting neither did I have a medical problem. It was just self-realisation that made me quit. I am 45 and if I wanted to give myself 10 years of living, I had to quit now before I drank myself to the grave. I had to reclaim the sharper, brighter me which got watered down.”

Today, Pooja has a fully stocked bar at home and even pours out drinks for friends and could sit through a party without having the urge to drink. “If I can’t be around alcohol and resist it, it means I’m not in control. Each day strengthens my resolve as I realise I have more hours to a day now. Even when I drank till 4 am, I’d be at work at 10 am but I was burning myself out. Today, I feel lighter with the excess water gone. All the drama alcohol brings is eliminated from my life,” she says.

Talking about her biggest achievement so far, she says, “When some of my female friends call me asking for help and advice to overcome their addiction, I feel very good. Though, I am not qualified but I give them motivation to face each day as it comes. I do not believe in having a long-term plan.”

Ending her marriage
Two years ago, Pooja ended her marriage of 12 years. “People did not even think that we could survive a few months together but we were together for 12 successful years. We promised each other that we would never look over each other’s shoulder and live a lie. We didn’t have children which made it easier for us.  One of the prime reasons for ending the marriage was that in the process of being a responsible wife, producer and production designer, I forgot and left the girl in me far behind. People do ask me, ‘Oh, you left your 12 years of marriage to find yourself’. Yes, that bloody well is the reason I left. Not for somebody else or a comfortable life, I gave all that up for being fiercely single and living the life on my own terms.”

Having children
At one point in her life, she wanted to have six children. “Today, science has advanced to the extent that I could have children whenever I want. Do I want to opt for surrogacy? I do not. At present I do not have any such plans but if I feel like that in future, I might have a child of my own. I am sorry if I am going to disappoint women who feel that becoming a mother completes you. I don’t feel I am any less of a woman for not having a child. I do not think any woman in the world should feel that way. It’s a personal choice.

Why me syndrome
“We all go through a phase when we think that why everything bad is happening. I don’t believe in feeling victimised, instead I like facing it on. Would I like to change a few things in life, Yes! But at the end of the day, mistakes are the dues you get to have a full life. And remember it’s a fact that bad thing happens to good people and good things always happen to good people. So, you need to get passed it and me true to yourself,” she states.