From surprise announcements to exotic destinations, a look at the most memorable weddings of this year. 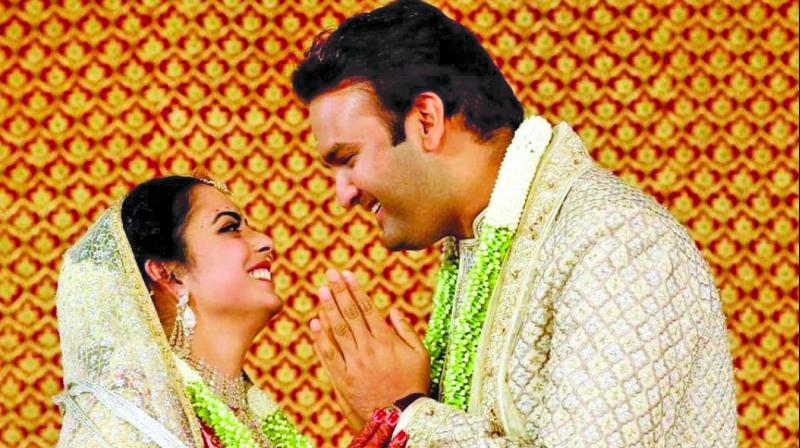 The year 2018 can easily be crowned the year of grandiose weddings, with a slew of the power couples tying the knot at exotic locales amidst friends and families in tightly guarded affairs that were scrutinised by millions. But more importantly, this year has been influential in redefining the meaning of the ‘big fat Indian wedding’, setting new standards for splashier celebrations by the billion. From weddings at scenic locales to parties that gave guests a weeklong hangover, 2018 saw some of the most memorable shaadis of the decade.

Isha Ambani and Anand Piramal
This was a wedding that crossed all boundaries of opulence. Right from the elaborate pre-wedding festivities at the Oberoi Udaivilas hotel in Udaipur to the performance by American pop sensation Beyonce who is rumoured to have charged a whopping 20 crore rupees for her performance and the former Former US Secretary of State Hillary Clinton in the guest list, this wedding will go down in history. What’s more is that the wedding brought the three Khans — Salman, Shah Rukh and Aamir on one stage, a feat that Bollywood has been trying to achieve since time immemorial. The couple took their vows at Mukesh Ambani’s Antilia residence in Mumbai.

Sonam Kapoor Ahuja and Anand Ahuja
The year’s first filmi wedding — Sonam Kapoor Ahuja and Anand Ahuja —  set the tone for the rest of the year. The couple tied the knot on May 8 at the Kapoor family’s heritage bungalow in Mumbai in a star-studded Sikh affair. This was followed by a reception for friends and Bollywood colleagues, which was nothing short of a big fat Punjabi dance party that lasted till the wee hours of the morning. The booze flowed all night, the music blared from the rooftops and the baaratis couldn’t stop stomping the dance floor. Moreover, the couple looked head-over-heels in love, sharing sweet nothings between candid shots for the cameras.

Neha-Dhupia and Angad Bedi
Unlike their Bollywood counterparts, Neha and Angad chose a low-key wedding this year and tied the knot in a secret ceremony in Delhi. While people were still recovering from the Sonam-Anand wedding hangover, Neha and Angad’s nuptial announcement came as a surprise to everyone. The couple also admitted that Neha was pregnant at the time of the wedding, which explains why they decided to tie the knot hastily.  The couple is blessed with a baby girl, Mehr Dhupia Bedi.

Priyanka Chopra - Nick Jonas
The weeklong wedding festivities began in Mumbai on November 26 where Priyanka’s mom invited the wedding party to her home for some downtime. The wedding squad then flew to Jodhpur the next day for celebrations at the Umaid Bhawan Palace. For the sangeet, the Chopra family decided to mimic the couples love story through songs, skits and flashes from their lives. The couple married in both Christian and Hindu wedding ceremonies in Jodhpur. Priyanka was a sight to behold at both ceremonies, wearing an immaculate white Ralph Lauren gown complete with a 5 feet long tulle veil for the Christian wedding and a red Sabyasachi lehenga for the Hindu one. Jonas, meanwhile, was dressed in a custom Ralph Lauren label double-breasted black tuxedo with the Urdu words ‘My Jaan’, stitched inside the lapel of his suit.

Deepika Padukone and Ranveer Singh
The DeepVeer wedding celebrations were easily the most talked about wedding of the year. The couple tied the knot in a faraway land in Italy’s Lake Como in both Konkani and North Indian wedding ceremonies. A stream of back-to-back reception parties followed in Mumbai and Bengaluru. The bride and groom wore Sabyasachi ensembles for all their functions and looked nothing short of an extension from an SLB film —replete with the chemistry, opulence and drama.

Kapil Sharma and Ginni Charath:
Comedian and actor Kapil Sharma tied the knot with girlfriend Ginni Charath on December 12 in Jalandhar and threw a reception in Mumbai on Christmas Eve. In attendance were the bigwigs of the entertainment world as well as several sports stars. Celebrities including Ranveer Singh, Deepika Padukone, Anil Kapoor, Kartik Aaryan, Kriti Sanon, Manoj Bajpayee, Rekha, and Karan Johar marked their presence at the function.

Saina Nehwal and Parupalli Kashyap:
The wedding was a small gathering of about 40 guests, including relatives of the Saina and Kashyap's families. The wedding took place at Saina's residence in Orion villas at Raidurgam in Cyberabad and was followed by a grand reception in the evening. Saina announced the news of her wedding on Twitter with the heartwarming caption: “Best match of my life #justmarried”