Not many might know that ‘Kai Po Che’ actor Sushant Singh Rajput was a trained dancer much before he got into films. 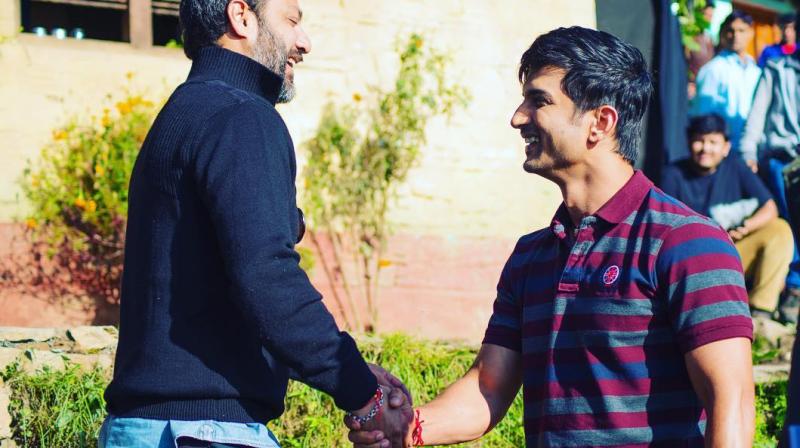 Abhishek Kapoor and Sushant Singh Rajput on the sets of 'Kedarnath'.

Mumbai: Not many might know that ‘Kai Po Che’ actor Sushant Singh Rajput was a trained dancer much before he got into films. The actor was a part of the Shiamak dance troupe while performing on ‘Dhoom Again’, before he got into TV with ‘Pavitra Rishta’ and eventually bagged Bollywood films.

A few days back, Abhishek Kapoor was all praises for Sushant’s dance. Here’s the post:

#Repost @gattukapoor (@get_repost) ・・・ This is our 2nd film together and strangely id never seen u dance.. i was so blown away by what u showed us over the past couple days. Those moves merely reflected another dimension to what a talented and blessed individual u are. We part now for a few days and i look forward to have u back to finish this beautiful journey we’ve started. Shambhoo👊 @sushantsinghrajput #saraalikhan @guyintheskypictures @pragyadav @iprernaarora @kriarj @ekmainaurektu7_ @ektaravikapoor #kedarnath #kedarnaththemovie #tandav #jaibholenath

Sushant did not only dance, but he also choreographed the song.

A source from the set informed, "The song was initially planned to be at least 3-4 day shoot schedule. It's an upbeat wedding song with challenging, fast paced choreography designed by Adil Shaikh. Sushant helped choreographer Adil Shaikh to create the sequence and also improvised on set. Shot in Mumbai's Filmcity, the set too was very extravagant and the makers had allotted 4 days for the shoot. However, Sushant managed to complete shooting for the entire song in just 2 days. Not only did the actor immediately ace the choreography, but shot and rehearsed for hours at a stretch keeping with the flow of the song. They managed to wrap the shoot in 2 days and Sushant took everyone by surprise with his professionalism, his energy and the dedication he put into shooting the song and making it one of the biggest songs of next year."

Prernaa Arora added, "Since the scale of Kedarnath is definitely a highlight of the film, it was important for us to also mount this song on that kind of large scale. Though we anticipated that it would take 4 days to complete shooting, Sushant did manage to surprise us and wrapped the song in 2 days. He is extremely professional and very hard-working and we are happy to have him on the film.”