Ranveer will next be seen as Alauddin Khilji in Deepika Padukone-Shahid Kapoor starrer film ‘Padmavat’. 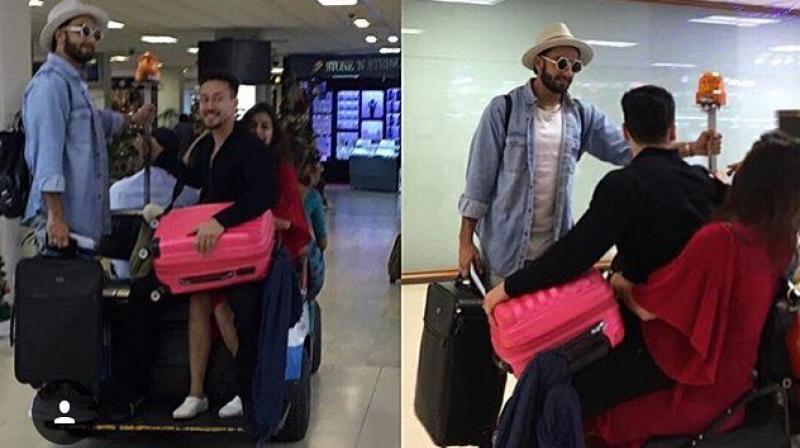 Ranveer Singh at the airport with Tiger Shroff and Disha Patani.

Mumbai: Bollywood celebrities are off to celebrate New Year in their own way. Tiger Shroff and Disha Patani too were about to catch a flight, when Ranveer Singh bumped into them.

Ranveer being his usual self was amused around the couple. Watch the video here:

Here are some clearer pictures of Ranveer with Tiger and Disha:

Ranveer Singh spotted with Tiger Shroff and Disha Patani at the Sri Lanka Airport off for his New Year Vacation ❤️✈️# Bae spreading smiles and laughter wherever he goes! ❤️🤣 #ranveersingh #ourchamp #kingofhearts

Tiger and Disha were leaving for the shooting of their next schedule of ‘Baaghi 2’, while Ranveer was reportedly heading to Maldives for his vacation. Taking a cart at the airport, Ranveer went standing with his luggage, while Tiger preferred sitting on Disha’s lap with a pink luggage. Here’s the picture:

On the work front, Ranveer will next be seen as Alauddin Khilji in Deepika Padukone-Shahid Kapoor starrer film which might soon be named ‘Padmavat’. ‘Padmavat’ was earlier named ‘Padmavati’, but CBFC claims the title will have to be changed if the movie wants to release.