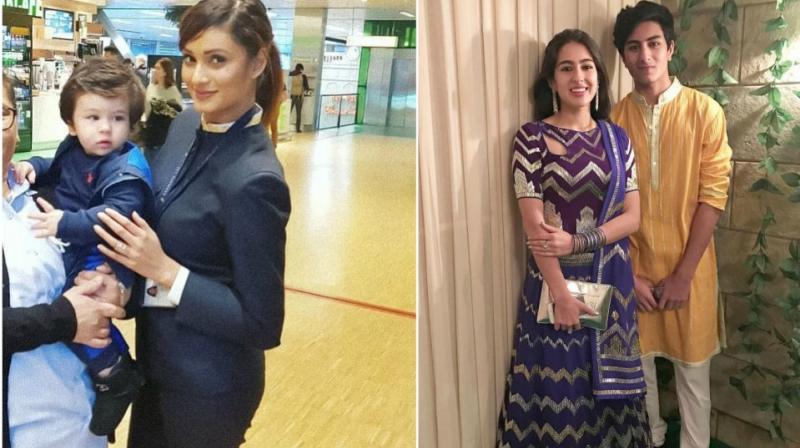 Taimur in Amsterdam; Sara and Ibrahim pose for the cameras.

Mumbai: Saif Ali Khan and Kareena Kapoor Khan’s little munchkin Taimur Ali Khan Pataudi celebrated his birthday a few days back. While the whole of Kapoor family was spotted at the celebrations, siblings Ibrahim and Sara Ali Khan gave it a miss. Wonder why?

Sara was reportedly busy shooting for her Bollywood debut film ‘Kedarnath’, which is why she had to miss the birthday bash. Ibrahim too was accompanying Sara on the sets.

A source explained to Pinkvilla, "Fact is, Sara was prepping with the ‘Kedarnath’ crew as she has been continuously shooting for the film for over two weeks now. While Taimur's birthday was on December 20, her schedule was for the next few days after that and her director had wanted Sara to stay back for some workshops. It's a challenging film and Sara is completely focusing on her debut film now."

Meanwhile, Ibrahim, wanted to spend some quality time with his sister and mother, Amrita Singh. "Ibrahim is in town on his Christmas vacay as he's been pursuing further studies in London and he too decided to stay back with his sister in Mumbai as they are very close and spend some time with her. Both Sara and her brother are very close to Saif and Kareena and adore Taimur so if they skipped the bash at Pataudi there is nothing more to read into it," the source added.

Meanwhile Taimur is currently in Amsterdam with parents. He was spotted at the airport with his fans. Here’s the picture:

Everybody wants a picture with Taimur 💞 #taimur #taimuralikhan