Alia, Sidharth and Varun, Natasha have broken up? Here's an update

While one of the couples is still going strong, the other has broken up and might have given the biggest hint yet. 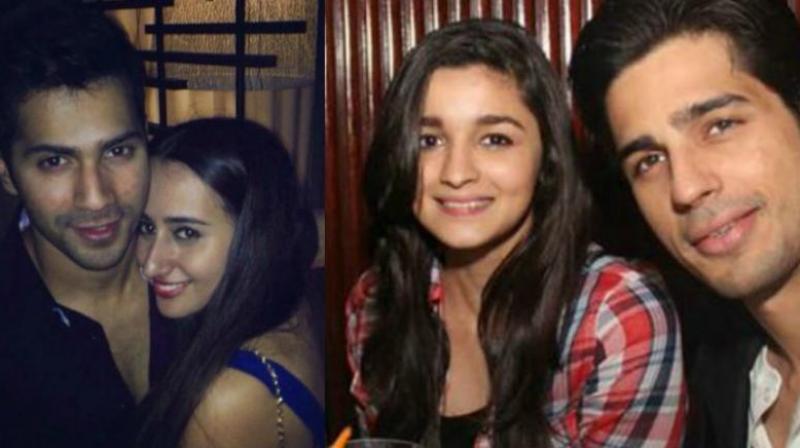 Sidharth Malhotra-Alia Bhatt and Varun Dhawan-Natasha Dalal are always in the news for their relationships.

Mumbai: 'Students of the Year' Varun Dhawan, Sidharth Malhotra and Alia Bhatt have made it big for themselves in films, but their love lives are also a part of the rumour mills.

The trio suddenly start getting referred to in pairs, like Alia getting linked to both her heroes initially.

But later, it became clear that Alia was going strong with Sidharth, and Varun with his fashion designer girlfriend Natasha Dalal.

Despite no confirmation from the actors about their relationships, reports of both the couples breaking up surfaced, and now it seems only one of them is true.

Sidharth’s ‘A Gentleman’ co-star Jacqueline Fernandez was earlier ‘held responsible’ for his break-up with Alia, but the actress had asserted that they were just friends, and the former cleared the air that he is single.

Later, it was reported that Karan Johar played peacemaker between the pair and the two were then back together.

But now, it seems Alia and Sidharth have indeed broken up, and they might have given the biggest hint regarding it.

The ex-couple had set off abroad for a holiday just before New Year’s Eve last two years, reportedly to Mexico in 2015 and New York in 2016.

However, this time around, they are not together.

Alia has gone to Bali with her girl gang just before one of her friend’s marriage, while Sidharth will most probably be in India, and this might just be that big hint about their break-up.

On the other hand, Varun and Natasha have been going strong. Days after Natasha was snapped with the Dhawan family, the couple stepped out together for a Christmas dinner at their friend’s place.

This tale of two couples goes on to show that very few couples manage to go the distance when it comes to relationships.

Meanwhile, Varun's pairing with both actresses linked to Sidharth, Alia and Jacqueline, has been the most appreciated. When asked about it in an interview with Mumbai Mirror, Varun said, “I’ve worked with Jacqueline twice, she’s a fireball of energy and talent, and thrice with Alia with whom I started my journey and now have the Dulhania franchise. Both are special. Maybe all three of us will come together soon, you never know.”

That would a grand collaboration, if that ever happens.