The director talks about completing the shoot, celebrating wrap with a party and his actors Varun and Banita Sandhu. 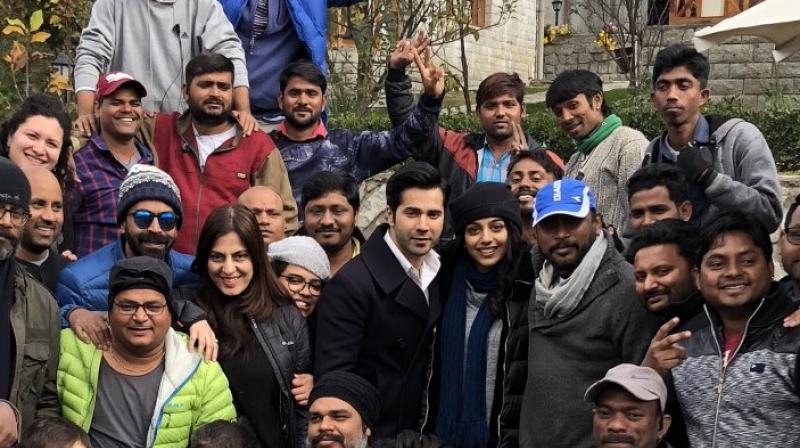 Varun Dhawan, Banita Sandhu and Shoojit Sircar along with the cast and crew.

New Delhi: Director Shoojit Sircar on Wednesday wrapped up the shooting of his film 'October', a Delhi-set slice-of-life love story, starring Varun Dhawan and Banita Sandhu in the lead roles.

The film's team finished the last day of the shoot in Manali and Sircar says they will celebrate it with a small party.

"Yes, there is a party. It is really cold in Manali and we have have an early morning flight to catch. We are happy and relieved that we have finished the shoot before time," Sircar told PTI over phone.

The director, best known for his films such as 'Vicky Donor', 'Piku' and 'Pink', says 'October' will explore a different side of Delhi.

"I find a lot of character in Delhi. I am familiar with the city and the people. It is always very comforting to return to Delhi. I will explore the romantic side of the city this time."

The director has teamed up with Varun for the first time and is all praise for the actor.

"I think he is very bright. He is trying to open up to different genres. Actors should keep exploring different genres, stories and directors. At the end of the day, you have to challenge yourself."

He decided to cast Banita after directing her in one of his commercials.

"It just so happened that the ad turned out to be really good, and we found the character that we were looking for in her."

Sircar's producing partner Ronnie Lahiri said they would release the film on April 13 next year via their company Rising Sun Films.

Lahiri said they finished the shoot in just 38 days and ahead of schedule.

"We loved collaborating with Varun. It was a great atmosphere on the sets. It was never pack and to my room for Varun. He would usually hang out with the crew."

Varun also tweeted about the wrap of the film, sharing pictures with the team, using rhyming words in the caption.

#October wraps in November. Will release in April and will stay with you forever. pic.twitter.com/sedfWsqZGB