Entertainment   Bollywood  30 Aug 2017  Taanaji film will be mother of all, even bigger than Baahubali: Ajay Devgn
Entertainment, Bollywood

Taanaji film will be mother of all, even bigger than Baahubali: Ajay Devgn

The actor, who will also produce the film, has extremely high expectations from the real-life based period drama. 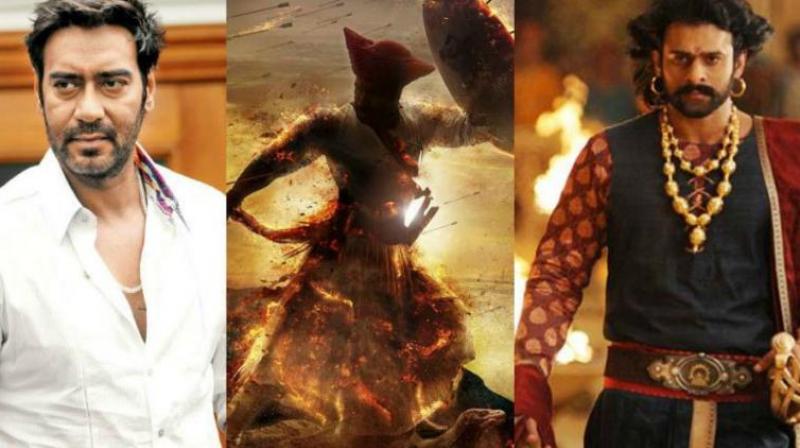 The poster of Ajay Devgn starrer 'Taanaji: The Unsung Hero' and Prabhas in a still from 'Baahubali.'

Mumbai: After directing Shivaay last year, Ajay Devgn is back with yet another rustic film, Baadshaho, directed by Milan Luthria. In a candid chat, Ajay talks about his role in the film, working with Emraan Hashmi, Golmaal Again, his upcoming production ventures and much more. Excerpts:

How did the idea of Baadshaho come about?

We were shooting Kachche Dhaage in Rajasthan and people used to tell us stories. During the time of Emergency, there was a princess who had a lot of gold and the government asked to seize that gold. They dismantled the palace and acquired the gold, but it never reached the concerned authorities. It was a very interesting thought which fascinated us. Around a year back, I thought of discussing it with Milan and make a film on it. This heist is the backdrop of the film around which there is a story of six badasses. Rajat Arora has written it nicely. He writes amazing dialogues. At times, we have to chalk off a few of them since he writes too many of them for a scene.

Why this title Baadshaho?

The word Baadshaho is really famous in Punjab. It was Milan’s idea to keep this title. There are six people in the film who are like a king in their own ways.

How was it working with Milan Luthria and Emraan Hashmi yet again?

I have a comfort zone with Milan Luthria and Emraan Hashmi as we have worked together before. Whenever I hear stories, I try not to repeat them. I played the role of an underworld don twice, once in Company and other one in OUATIM but there was no similarity in both the characters. When we work with same people, we try and do different things. I don’t like to repeat genres. After Baadshaho, I am doing a full-fledged comedy Golmaal Again.

Seems like period films aren’t working these days, your take?

But films like Once Upon A Time In Mumbai, Rustom worked. It is about a good film, be it any genre. The films you have mentioned weren’t good films, but the ones I mentioned to you were good films, hence worked.

Do you feel that Indian films are more content-driven films?

Our films are progressing a lot, I feel. Filmmakers are making content-driven films these days. There are no smooches in Baadshaho. In fact, there is not much action too, but there is drama and thrill in it. I have always tried to do different kind of films. I did Zakhm way back since I liked that kind of cinema. However, people have started doing human interest stories now and I am happy about it. I feel romance is fading away in our films. Emotions are more on the surface, the depth is reducing, but I try and not to do vulgar films, keeping kids in mind.

I am producing Taanaji, Capsule Gill and a film with Sanjay Dutt and Farhan Akhtar in the near future. I can claim that the visual effects which people have seen it in Shivaay, they will witness 10 times of it in Taanaji. It is a period film and I feel that it will be the mother of all, even bigger than Baahubali franchise. We are currently busy with the pre-production of the film and will go on floors in March 2018. I had even announced Battle of Saragarhi long back, but it will take another two years to make it.

Your thoughts on Golmaal Again…

Golmaal Again will be madder and bigger than the previous ones. It was great working with Parineeti Chopra and Tabu. They both are very talented. Golmaal is like a family to me.

I have confidence in my roles. I don’t understand why people fear to do multi-starrer films. Whenever I have done such a film, I have always stood out, be it Company or Hum Dil De Chuke Sanam.