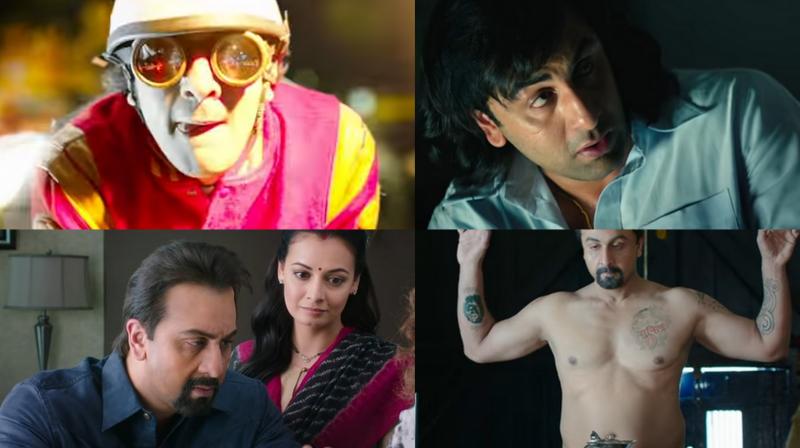 ‘Sanju’ has been in the news ever since the idea germinated. Many people questioned whether a criminal’s life should be shown on screen, but all such questions soon turned to curiosity after Ranbir Kapoor’s look from the movie was leaked.

It is difficult to not notice any similarities between Sanjay Dutt in real life and Ranbir Kapoor on screen as the latter recreated the moments of Sanju baba’s life.

Ranbir has often said how he’s been a fan of Sanjay Dutt and wishes that Baba starts liking him and his work.

But when it came to Sonam Kapoor, her reason for doing ‘Sanju’ was slightly different. “I just wanted to work with Raju (Rajkumar Hirani) sir. Whatever films he offers me, I'll say yes,” she said at the recently held trailer launch.

Paresh Rawal, who appeared to be overexcited mentioned, “I didn't even speak about money with Sanju since I worked with my favourite actor Ranbir Kapoor.”

Dia Mirza plays the role of Sanjay Dutt’s wife Maanyata in the film. When asked about her technique, she said, “I empathized with Maanyata like I do with every character.”

Ranbir, who got into the zone of Sanjay Dutt, also got out of it and became Ranbir Kapoor again thanks to ‘Brahmastra’. “I simultaneously worked in ‘Brahmastra’ so didn't have problem going back to becoming Ranbir Kapoor,” said the actor.

Ranbir has a nude scene in the film. When asked if he had any trouble getting with the scene, he added, “I'm very shy in real life, but not in front of the camera.”

From the looks of the trailer, Vicky Kaushal seems to be the strong friend of (on-screen) Sanjay Dutt, who even discussed sex with the actor in the film. Ask if Salman Khan will be shown in the film and Rajkumar Hirani is quick to probe, “Vicky is not playing Salman. Most of Vicky's personality is from Sanjay's friend from USA, Paresh.”

Not giving out any name in particular, Rajkumar added, “Sonam is playing one girlfriend from the 308 girlfriends.”

Talking about girlfriends, Sanjay Dutt became most popular for his alleged affair with Madhuri Dixit. As soon as the actress’ name popped up at the trailer launch, Vidhu Vinod Chopra humoured, “The film has mine and Raju's love story too. You just watch the film.”

Finally answering the hot topic, Ranbir spoke about his absence from social media, stating, “I will be myself on social media, not films. Right now I'm happy staying away, but maybe some day.”