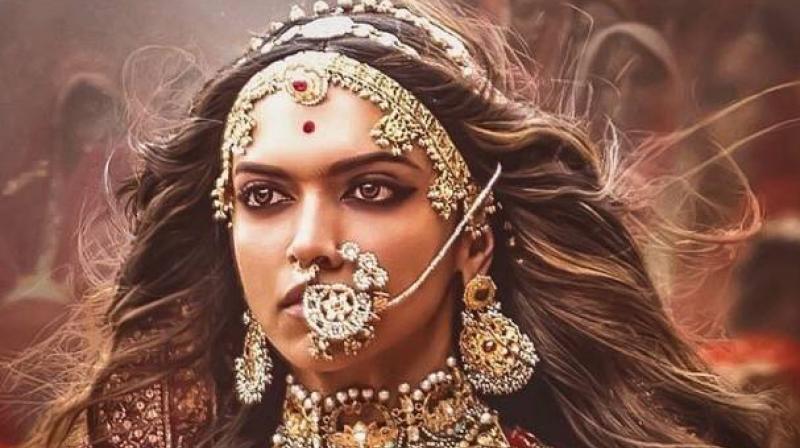 Deepika Padukone in a still from 'Padmaavat'.

Mumbai: ‘Padmaavat’, starring Deepika Padukone, Ranveer Singh and Shahid Kapoor, is being appreciated amongst the audience, so much so that the movie has already crossed the 100 crore club.

It also happens to be Shahid Kapoor’s first 100 crore club movie. That’s right. In spite of having successful films like ‘Kaminey’, ‘Jab We Met’ and ‘Haider’ that received good response from the audience and got critically acclaimed, none of his movies have even made a nett business of 70 crores in India.

“After doing films like ‘Haider’ and ‘Udta Punjab’ where I played edgy characters, I wasn’t afraid to take on a character that is so righteous and correct. As an actor, it was important to live up to the character of Ratan Singh, otherwise it would take away from the goodness of the film,” explains Shahid.

He says, “It was tougher than all the other roles I have played. I wanted to work with Mr. Bhansali, and he told me that if I didn’t do this role, he wouldn’t be able to make the film. He also explained that he needed somebody of that calibre to step into the film because he had a very strong villain. So, the hero had to stand up to him, even with a role that was understated. When the promos released, the audience was not sure about my part. But today, after they have seen it and given me so much love for it, I feel that I can take ownership of the film. Even though my character had less screen time, I know that Ratan Singh made a huge impact.”

“After all the work that I’ve done, I need roles like this to push me. I feel secure as an actor and I want people to see my work in totality. For that, it is essential to do different films. Ratan Singh was a hero, I will always be proud of portraying him. The film is my dedication to every Rajput out there and with a wife who is a Rajput; I have a huge responsibility on my shoulders. ‘Padmaavat’ will be right up there on my shelf, as one of my most favourite films,” concluded Shahid.

Deepika revealed to the media that she and Ranveer did not even shoot together. She said, "We (Ranveer and I) don’t have even a moment together in this film. When I was shooting he was not there and vice versa. I was not aware what work he has done in the film."

"Being a central protagonist as a female actor and with this kind of budget, I did feel a sense of responsibility so at times I used to go to the sets when I saw a little bit of what they were doing. Other than that, it seems as if we have shot two different films," added Deepika.

Recalling working on the Jauhar scene Dippy added, "The Jauhar speech was done in one take. I felt I would forget the lines. I did rehearsals for it. It was an intense moment on the sets. Everyone was quiet. They had kept three days for this but we did it in half a day."

She further went on to tell the media about her parents’ reaction by saying, "My parents have seen the film and they were proud of my work, but there was a sense of disbelief like they were thinking is she our daughter? As I don’t stay with them, they don’t know much in detail about the role or the film. I want them to enjoy the film as a normal audience. They had no idea about Padmaavat and the story. The last 15 minutes of the film for my parents were tough. They hate it when I die in films."

On the best compliment she received for her movie, Deepika told DNA, “Well, it’s a bit awkward but it would have to be the one given to me by Javed Akhtar saab. He said, ‘This is your Mother India.’ I just bowed my head in front of him. Sanjay Leela Bhansali sir was also present when he said it.”

Deepika even elaborated on the fiasco around jauhar scene and said, “Let me put things in perspective. We are not endorsing jauhar. You must see the scene/practice in context to the period in which it was shown. And when you do that, you will realise, it’s so powerful. You do not feel like she is doing anything wrong. You want her to embrace the flames because she is going to be united with the man she loves.

For me, it was the most difficult scene to perform. We shot it in peak summer at Film City in Mumbai. I cannot tell you how challenging it was. After every single take, I would go up to my van, have a shower, get ready for my scene and go back. With my heavy costume and jewellery, the heat was oppressive. It was such a difficult thing to execute. There is absolutely no dialogue. And when I saw the scene during the cast and crew screening, Sanjay sir, Ranveer (Singh) and I, who were sitting together, started bawling. Everyone stood up and clapped. We are part of this film, we know the story, we have been through the journey, yet it moved us. Then, Janhvi (Sridevi’s daughter), who had gone for a screening, told me that people there were standing and clapping. I do not know how Sanjay Leela Bhansali could hold a climax of 15 minutes with no dialogue. It is sheer performance and the way he has treated that entire scene is genius. It is one of the best climax scenes that I’ve ever seen.”

Director Sanjay Leela Bhansali also seems to find the experience quite surreal. In an interview to Quint, he said, “I really don’t know how I got through this period. But after all of this, to have the film release finally in spite of all odds, and most importantly, to have audiences flocking to see it in spite of the threats… I can’t tell you what a relief and joy it is. Just hearing about the collections washes away all my pain of the last 8-9 months… well, maybe not all of it.”

He added, “Every time I was attacked, I used my pain and suffering as an impetus to work better. I channelised all my anxiety into making ‘Padmaavat’. I think suffering has always been an incentive for my creativity.”

When asked about casting Ranveer Singh-Shahid Kapoor-Deepika Padukone for the film, he said, “It made no difference to me whether they had successes or flops behind them. I wanted these actors and only these three actors. And I am so happy with the quality of performances they have given in my film.”

He also credited his mother and his friends for being by his side when he was braving controversies. “I’ve toiled over every moment of the film,” he concluded.