Many people have slammed the movie for spewing hate against South Indians. 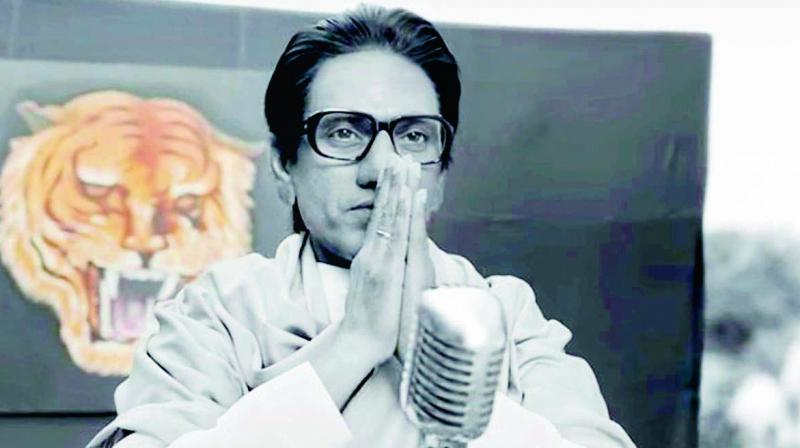 A still from the movie Thackeray

The trailer of the much-awaited biopic of politician Bal Thackeray that released on Wednesday, stirred up a hornet’s nest. In one scene, which is missing from the Hindi trailer of the film, Nawazuddin Siddiqui, who plays Bal Thackeray, refers to South Indians as “saale yandugundu” while addressing a rally. It is well-known that the Shiv Sena supremo polarised the Marathi people and urged them to take up violence against the South Indians. Several people, including Tamil star Siddharth have tweeted against the biopic’s anti-South Indian tone.

“Nawazuddin has repeated ‘Uthao lungi bajao pungi’ (lift the lungi and *’#$ him) in the film #Thackeray. Clearly hate speech against South Indians... In a film glorifying the person who said it! Are you planning to make money out of this propaganda? Stop selling hate! Scary stuff!” tweeted Siddharth.

This is not the first time a Bollywood movie has portrayed South Indians poorly. From Padosan to Chennai Express, South Indians have a stereotypical portrayal — dark-skinned, wearing a lungi and speaking in a comically heavy South Indian accent. “Bollywood filmmakers have limited understanding of South Indian culture,” says Dhananjayan, a National award-winning Tamil producer and trade analyst, adding, “In a time, when South Indian flicks, especially Tamil movies, are setting benchmark in several aspects, including technical advancement, depicting them in a degrading manner is unwarranted.”

Many feel that Bollywood should get its fact right and do some research before portraying South Indians characters. Talking about the issue Magizhan, a Tamil script writer says, “The Bollywood filmmakers have a very lethargic attitude towards knowing the Southern India properly before portraying South Indian characters and the sad truth is they are not even willing to know. The language is mostly presented wrongly and they make no efforts to understand it either.”

Magizhan also points out that Shiv Sena was formed purely on the grounds of hatred and to use such language in the film will only divide people. “There is a dearth of socially conscious people in Bollywood. I think before making a movie and putting it out for people of vast cultural diversity to see, they should first research well about the nuances and be cautious to not hurt cultural sentiments of the people.”

When Bollywood’s superstar Shah Rukh Khan played a Tamilian, Shekhar Subramaniam, in Ra.One, his character went to the extent of actually eating noodles with yogurt — propagating that south Indians don’t know how to eat cuisines that aren’t rice and sambar. Arunkumar, a research scholar from Chennai, who is currently studying in JNU Delhi, feels, “Bollywood should at least check the details before making the movie. For example a ‘Chennai Junction’  is mentioned on the Chennai Express poster. However, there is no such station in Chennai; there is just Chennai Central, Egmore and Tambaram. Similarly, in Ra.One the noodle eating scene is actually quite offensive. Even in 2 States, Revathy, who herself is a Tamilian, was made to speak gibberish in Tamil that did not make any sense. In Bollywood movies, they try to mimic everything and make it comical. Tamilians don’t speak Hindi, but in some movies they make Tamil characters speak in Hindi in a heavy south Indian accent.”

Tollywood’s leading story and screen writer Kona Venkat, however, feels that there’s no reason to be offended because the trailer (or the film) is only showcasing the history and what has already happened.

“The film is a biopic on Bal Thackrey, so naturally it features all the significant moments and milestone of his life. Just how he initiated a revolt against people from Uttar Pradesh and Bihar, he did it against South Indians too. It is history and we can’t deny it. And that’s what the filmmakers have shown. Moreover, I think that the filmmakers personally don’t have anything against the South Indians. Siddharth should be offended by what Bal Thackey said and did, not the movie or the filmmakers,” he says.

— With inputs from Sashidhar Adivi