Bottom of the Heap 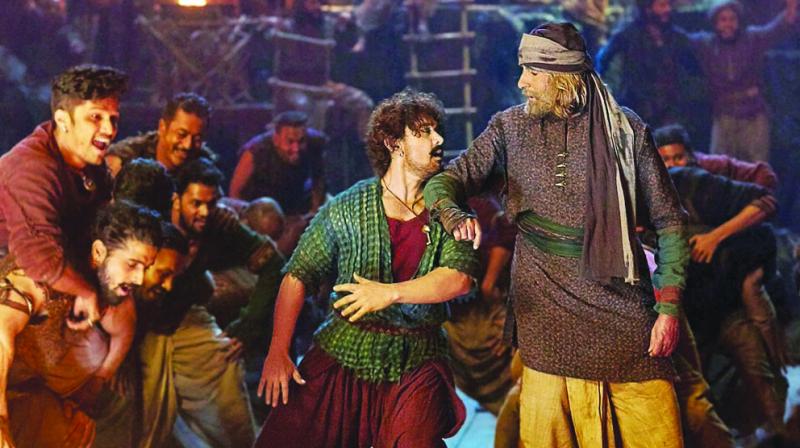 Thugs of Hindostan: Masquerading as Majestic
Not done! You can’t pair two of Bollywood’s biggest superstars, Amitabh Bachchan and Aamir Khan together for the first time ever, and then make a film that confounds the senses, boggles the mind and tries the patience.

Thugs of Hindostan managed to do all this, and more. It was guilty of many crimes, not the least of them being the rather strange attempt to pass off the corny as epic, and disheveled as spectacular.

This was an overblown, undercooked piece of abomination masquerading as majestic. Speckled on top and hollow and  dull inside, this was the kind of con-job that a door-to-door salesman  for an icky brand of perfume sells to you when your olfactory nerves are not working.

Love Sonia: Where is the Love?
This well-intended melodrama about human trafficking and child prostitution had its heart in the right place. Sadly, the very perversities that ought to have galvanized the director into taking action seemed to drag the film down to the very level where the flesh trade exists.

There was something fundamentally amiss in a film where a posse of capable actors gets together to create a messy tribute to the Bleeding Hearts Club. The narrative seemed like a diehard fan of its own righteousness. Often, the sexual violence was repugnant not for being excessively graphic (which it is) but because the sadism seems to be disturbingly gratuitous.  In some cases, cinema about sexual violence gets so close to its subject that it loses its dispassion and ends up celebrating rather than abnegating violence. Love Sonia meant well; no doubt about that. Regrettably, so does the guy who randomly shoots down innocent people in a pub as a solution to ethnic inundation.

Pataakha: Numbing Experience
It’s been downhill all the way for Vishal Bhardwaj who for some strange reason, continues to be termed a messianic moviemaker in spite of churning out dud after dud.

If anyone thought that following the colossal fiasco Rangoon, it couldn’t get any worse for Bhardwaj, they were wrong. Monstrously wrong. Pataakha was even worse than Rangoon.

The story of two warring sisters, played with do-or-die frenzy by Sanya Malhotra and Radhika Madan, the flare-ups between the  two grimy, unwashed, uncouth sisters were shot  like kabaddi matches. Only, this was no Dangal. What was Pataakha?! Viewers are still trying to figure out its dusty, dirty ambience, with dialogues to match.

While Sanya and Radhika rolled on the floor in raging fury, Sunil Grover clapped and cheered them on. Clearly he lacked genuine entertainment in his life. For almost three tortuous hours as one sister went blind, the other went deaf, the audience just went numb watching an accomplished director lose his mojo.

Baaghi 2: Everyone had a Bawl
An overblown, padded-up and puffed-out adaptation of the engrossing Telugu hit Kshanam, Baaghi 2 was about an NRI who is summoned back to India by his former girlfriend to find her kidnapped daughter.

Tiger Shroff somersaults over flying choppers, flips over conifers, flies across cars and vanquishes adversaries with the quick-thinking machismo of a sumo wrestler thrown into a ring with a cunning and dangerous canine.

Tiger’s Ranveer stops at nothing. The trouble is that the film doesn’t know where to stop either. The original plot had some interesting twists and turns in the kidnapping drama. In the remake, the drama of a distressed mother (Disha Patani, so pale and pretty, your heart reaches out to her for all the wrong reasons) and her savior is converted into a loud scream-fest where everyone has a ‘bawl’.

There is so much sound and fury in the storytelling that viewers expected it to signify something. Alas, all they came away with was a convoluted attempt to regurgitate a solid thriller by injecting large doses of bombast and melodrama into the original.

By the time Salman Khan ripped off his shirt, and Bobby Deol followed suit, viewers were ready to rip off their hair in exasperation.

This maddening mishmash of hot babes and cool guys, including Anil Kapoor who lets his beard grow grey and his accent falter from angrezi to Bhojpuri, all for a cause, was a roaring, grunting, mess of a movie. Trashy beyond endurance, loud beyond the threshold of tolerance, and outrageous beyond all definitions of lowbrow entertainment, Race 3 gives a bad name to brand Salman Khan.

Just when we  thought he was  trying to build a more durable variety of mass entertainment by reinventing himself in  Bajrangi  Bhaijaan, Sultan and the unfortunate Tubelight, Race 3  came along to remind us with that when it comes to Salman Khan there is a very thin line between rationale and absurdity.

He skips, jumps and  crosses over into the  kingdom of crassness with  such impunity that you wonder what lies ahead in store for  this  hero of  the masses who it seems, has decided to abandon all efforts  to give a performance.

In Race 3 Salman was so indifferent and openly bored by the bustling balderdash, he makes no effort to make sense of the tangled mess of a plot. A sensible decision. Race 3 makes as much sense as Rakhi Sawant’s quotes or Aamir Khan’s nose ring in Thugs of Hindostan.