What’s with the fuss?

Even as Priyanka Chopra could speak at a literary event, people questioned her credibility to take stage. Was the outrage justified? We look in. 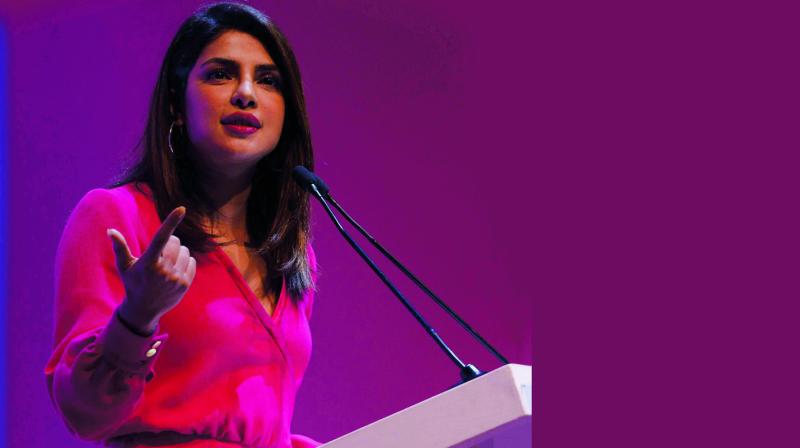 On Tuesday, Priyanka Chopra greeted an auditorium brimming with people eager to listen to her deliver a speech at the annual lecture organised by the publishing company Penguin Random House. Priyanka opened up about a plethora of pertinent issues around women, actors, and race to a full house.

From the wage disparity in the film industry and racism to sexual harassment, the #MeToo movement and marriage (while also diplomatically ducking a question on the Padmavati row), the Desi Girl bid adieu to an auditorium echoing with cheers and applaud.

But even before she could address a crowd about “breaking the glass ceiling: chasing a dream,” which was their theme for this year, people had started opining on social media. Twitter exploded with many authors and journalists wondering the reason behind the publishing house’s decision to host an actress to deliver its annual lecture. “Haven’t authors achieved enough in their field to be given this opportunity,” their unanimous thoughts rang.

“The publishing house Zubaan came up with a thread on Twitter listing just a few possible names who could have filled this spot, and I have to agree with it,” says published poet and feminist thinker Sharanya Manivannan. She even clarifies that it isn’t Priyanka credentials that are held in question, but the choice. “This has nothing to do with Priyanka Chopra, the person, or her abilities, or even for that matter the fact that she doesn’t even have a book ghost-written to her credit yet. It’s just that it seems like they were aware they’d made an oversight by inviting only men so far, so even if any woman would be a “token woman”, they could have made that choice more thoughtfully. They could picked someone whose ideas have a connection to publishing, readers and authors,” she elaborates.

Echoing Sharanya’s idea is the fact that Penguin’s previous annual lectures have provided stage to some of the biggest male authors — Dan Brown, Jeff Kinney, Dalai Lama, A. P. J. Abdul Kalam, Amartya Sen, Thomas Friedman, and even Amitabh Bachchan. So if Penguin’s idea was to invite a strong woman, they might have successfully delivered that, but have met with equal backlash.

Penguin’s idea was simple: “To bring leading writers, artists, thinkers and key personalities from India and across the world in direct contact with audiences and admirers in India”. But people soon started listing potential speakers for the evening. From acclaimed authors like Kiran Desai, Jhumpa Lahiri, and Tahmima Anam to journalists like Nisha Susan and Japleen Pasricha — the publishing house was spoilt for choice.

“They wanted to grab as much attention as possible. And they did so by inviting Priyanka Chopra,” says author Kiran Manral, adding that when she first read the announcement; she thought it was a precursor to a book announcement by Priyanka.

The author blames the audience for giving Priyanka such a stage. “In India, we weigh a lot of importance in two things: Bollywood and cricket. And it doesn’t come as a surprise to me that people would rather listen to her than anyone else,” she says, adding that because Bollywood stardom attracts eyeballs, it is an easier pick for publishing houses.

While some don’t see Priyanka’s credibility to be at a literature lecture, others believe the outrage isn’t justified because several non-authors have previously been a part of the event. “Priyanka is an achiever,” begins Anand Neelakantan, author of Asura. “I have seen several literature festivals even inviting B-grade actors or singers over excellent writers. So why not Priyanka?” he questions, stating that the controversy is unnecessary.

We got in touch with Penguin Random House to get an understanding of this issue from its end, but it wasn’t available to comment.