Bollywood celebs don’t stick their neck out or speak up on important issues. The silence exposes the hypocrisy and selective activism 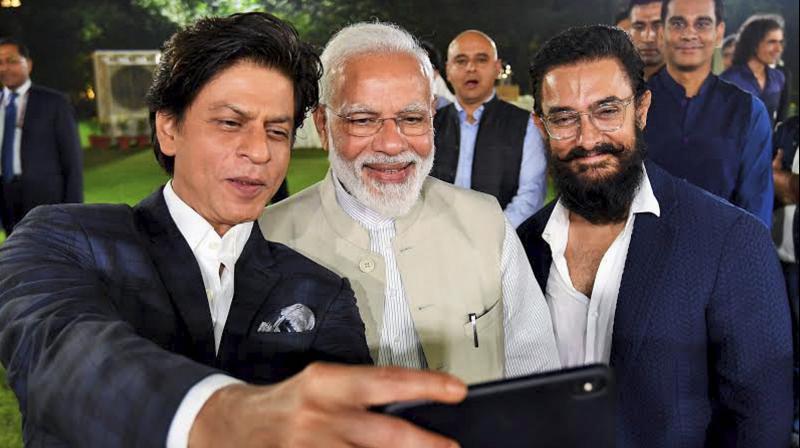 On October 2, a few days after the brutal Hathras rape and death of a 19-year-old Dalit girl was reported, the nation celebrated the 151st Gandhi Jayanti by paying tribute to the Father of the Nation. Several Bollywood actors paid homage to the non-violent freedom fighter by sharing their sayings and teachings. Among them was Shah Rukh Khan, who reminded his fans of Gandhiji’s three ideals — never to see, say or do anything bad. His Fan co-star and Article 15 actress Sayani Gupta quickly asked SRK, in the comments, to instead, speak up on important issues in the country as well as for the downtrodden, exploited countrymen, meaning the Hathras incident in which the 19-year-old succumbed to her injuries in a Delhi hospital.

In another case of calling out selective speech, South-Indian actress Parvathy Thiruvothu, known for her outspoken nature, sent a strong message against filmmaker Karan Johar’s recent tweet tagging PM Modi on his upcoming “Change Within” campaign by the film fraternity as a part of the 75 years of Indian independence. Parvathy added a screenshot of Karan’s tweet in one of her Instagram stories, with the word ‘Yuck’ in bold font struck across the screenshot image. Bollywood celebrities have a massive fan following, which makes them influencers whose opinions are, rightly or wrongly, taken seriously. However, very few of these celebs have spoken out on any social issue in the country, with most of them preferring to stay silent, unless motivated by one of their films nearing release, paying lip service to the cause in the name of promoting their film.

When it comes to offering condolences or wishing on festivals with trending hashtags, almost every Bollywood celeb makes their social media presence felt. But talk about serious matters that might put them under the spotlight, needing them to fight, and none of these celebs would show up for the cause.

Taal actress Mita Vashisht attributes this mum act of Bollywood celebs to their lack of awareness of the worldly issues. “To be an activist or to speak out you need to have an understanding and a consciousness of the world. We are talking about actors and industry folks. It is too much to expect wisdom or well-informed arguments from them. Just because they are popular doesn’t mean they are equipped to share gyaan (wisdom). We should not expect them to be politically and socially intelligent. It is different in Hollywood where actors are connected to political thinking. There was a time when people used to think. The intellectual ability is too less in Bollywood stars,” the actress asserts.

‘So let’s for a moment accept Mita’s point that one can’t expect actors and Bollywood celebs to be socially conscious, or consider their popularity to complement their intelligence. Apart from issues concerning their luxurious world, they fail to take notice of the awful things in their own industry. For instance, all this while when the nepotism, insider-outsider debate, Sushant’s murder theories, Rhea’s detention in drug case, Kangana’s house demolition, become the national issues, the millennial role models Amitabh Bachchan, Hrithik Roshan, Ajay Devgn and the three Khans preferred to stay mum.

Moreover, all the patriarchy songs that most Bollywood ‘feminists’ sang around Rhea Chakraborty’s arrest suddenly fell silent when Anurag Kashyap was accused of sexual misconduct by an actress.

Only to promote their films

Akshay Kumar recently broke his silence on the drug controversy and shared a video expressing his concern over the drug use in the industry and requested everyone to not view the entire industry as a bed of vice. In case you are wondering why he spoke so late about the drugs scandal in the film industry, well, his film Laxmmi Bomb is all set to release next month! So he chose to speak right before the release — a clear strategy to seek support from audiences. But the trick supposedly didn’t go down well with netizens and the actor had to bear the brunt of backfire.

Similarly, Aamir Khan, who chose to stay quiet during the entire Bollywood matter, has suddenly decided to take a plunge to support female taxi drivers in Delhi. The 3 Idiots actor is shooting in the capital for Laal Singh Chaddha!

So it would seem that everything these stars do is planned to promote their films with well-planned strategies.

According to actress Mita, the actors only care for the business and nothing else. “In the industry, it is all about business,” says Mita. “It’s always about whether your Friday night is going to work out or not. Everybody is minding their business so that their work doesn’t suffer. Everyone is a business person. You are only worried about your career and your new film. So discussing other issues is way beyond expectations as far as they are concerned.”

Not so safe to voice up

Some believe that stars who opine against the government get persecuted in one way or the other. The current atmosphere of fear and uncertainty has made people afraid to criticise the government. Some even believe instances such as Deepika Padukone’s support to JNU students is why she may have faced reparations recently.

There are several other instances in Bollywood, which led the actors speaking against the government into trouble, apart from vicious social-media trolling. Also, Bollywood films need certification from a government-controlled body to be released, thus making the actors more vulnerable. But does that justify their silence and pretence in deeply social matters?

Mirzapur actress Rasika Duggal agrees that celebs should speak up but she also believes that stars are easy target, who get trolled if something doesn’t go well with any group. “Celebs should speak, but they also have the choice of not responding,” she says.

Actress Tannishtha, who acted in films such as Parched and Angry Indian Goddesses, however, confesses that speaking out usually has severe reparations. “It’s scary to speak these days. When a big star speaks up, the reparations are scary. Not everyone would agree to what the star would say, some people would disagree and they would rip the actor apart. Ultimately, stars are also human beings. Even a small post they tweet would go viral, bringing along more trolls, so why would they invite that stress. Why would they entertain that negativity? We are all humans at the end,” says the actress.