Peecee, Twinkle back Tanushree in row with Nana, get strong replies from 'survivor'

The two popular names supporting the ex-actress made headlines, but the ‘Aashiq Banaya Aapne’ actress is not pleased. 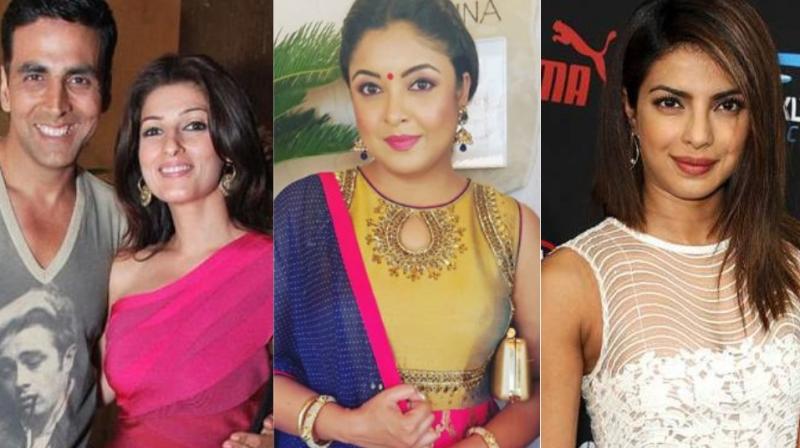 Mumbai: The Bollywood #MeToo movement surely looks on the anvil now, with several celebrities backing Tanushree Dutta in her fight against Nana Patekar and the notorious people in the industry in general over sexual harassment.

With A-listers like Priyanka Chopra, Sonam Kapoor, Parineeti Chopra, among others believing Tanuhsree’s account of experiencing harassment at the hands of Nana on the set of a film in 2008, the veteran actor is surely in a spot now.

One of the others who lent her support was Twinkle Khanna, who had called Tanushree ‘a brave woman’ and hoped her fight would pave the way for the fundamental right of a working environment without harassment and intimidation.

Please read this thread before judging or shaming #TanushreeDutta a working environment without harassment and intimidation is a fundamental right and by speaking up this brave woman helps pave the way towards that very goal for all of us! https://t.co/f8Nj9YWRvE
— Twinkle Khanna (@mrsfunnybones) September 28, 2018

But little did the former actress and writer realise that questions were naturally going to be directed towards her, as husband Akshay Kumar is currently shooting for ‘Housefull 4’, which also stars Nana.

Farah Khan had recently shared a picture of Nana and the other members of the film’s cast like Kriti Sanon and Pooja Hegde heading to Jaisalmer for the shoot.

And Tanushree, who had earlier named Akshay for continuing to work with Nana, also picked up that point in response to Twinkle’s support.”  “Thank you, ma'am, for supporting me but your husband is about to or is even shooting the film with Nana Patekar. What about that?'

She continued, “That is the question I am asking and how much of that support is genuine because if it doesn't result in any kind of disciplinary action. They have not apologised to me and they are already spinning lies so when you go ahead and work with them they have the sense of victory,” she was quoted as saying in an interview to Zoom.

The ‘Aashiq Banaya Aapne’ actress also called out Priyanka for tweeting support without taking her name and by calling her a ‘survivor’.

Tanushree had strong reply to her as well. "Well, it's amazing. She ( Priyanka) has finally decided to join the bandwagon. It's probably a smart thing to do at this point of time. But I just want people to know that I am not going to be reduced to a survivor. I have a name, I have a story and I have this truth that I am trying to get out because it's not for me but for people who will come forward in the generations to come," she said in the interview.

Well, Tanushree is not mincing words while talking with or about the stars and things are surely heating up.