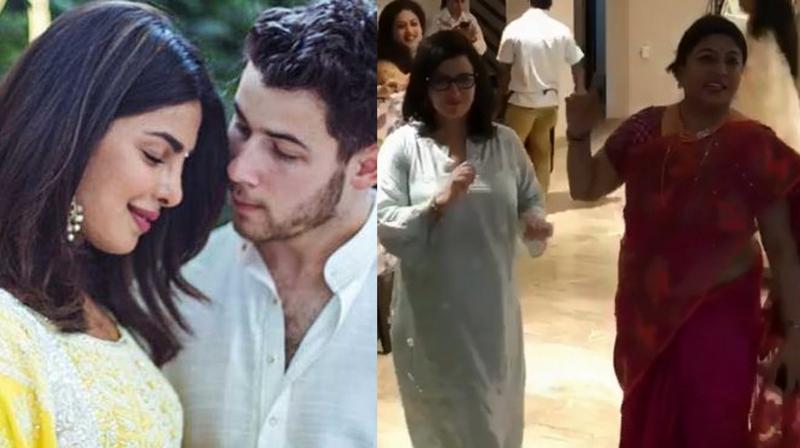 Priyanka Chopra and Nick Jonas's loved ones had a gala time at their roka ceremony.

Mumbai: Bollywood actor Priyanka Chopra recently got engaged to American singer Nick Jonas at a traditional Hindu roka ceremony and it looks like it was followed by a traditional Punjabi dance party.

Nick's mother Denise Jonas on Wednesday took to Instagram to share an adorable video in which she and Priyanka's mother Madhu Chopra can be seen shaking a leg to the tunes of Punjabi song '3 Peg'. Both the ladies groove to the quirky dance number and at one point, PeeCee's mom points at Denise and calls her ‘Munde Di Maa (Mother of the Groom).’

"Thank you @madhumalati for being patient with my lack of dance skills! I miss you. #engagementparty," she wrote alongside.

Thank you @madhumalati for being patient with my lack of dance skills! I miss you. #engagementparty

Nick and Priyanka met at the 2017 Met Gala Event where they appeared together on the red carpet. The two were later spotted with each other on many occasions.

Priyanka and Nick reportedly got engaged during former's birthday celebrations in London on July 18. Later, Nick flew down to India with his parents to make things official with his lady love. A 'roka' ceremony was organised on August 18 which was attended by near and dear ones.

Also read: Parineeti negotiates 'the deal' with Nick Jonas for his wedding with Priyanka Chopra

It was reported that the couple’s wedding will take place in October, however, Priyanka's mother Madhu Chopra has clarified that both Priyanka and Nick are busy with their work commitments.