The Queen strikes back

Manikarnika: The Queen of Jhansi is reigning supreme at the box office but where are the congratulatory messages from the fraternity? 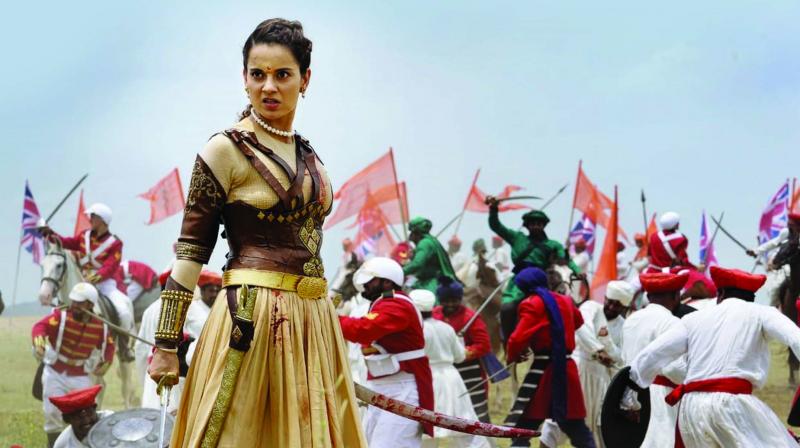 Not only is it the highest grosser in her career but also the highest for a female-centric film in the recent times.

Despite several controversies, drama and delays, Kangana Ranaut’s Manikarnika: The Queen Of Jhansi has opened with a bang. The Rani Laxmibai biopic that saw the actor double up as a director (along with Krish) has apparently earned more than Rs 40 crore during the weekend — thanks to the positive word-of-mouth promotions. Not only is the film the highest grosser in Kangana’s career but also the highest for a female-centric film in recent times.  While critics and reviewers have lauded Kangana for her intense portrayal, other filmmakers’ from the Bollywood fraternity are gushing over her confidence in taking on the responsibility of a director and delivering it

Madhur Bhandarkar, who earlier worked with Kangana in Fashion, states that he’s glad to see female-centric films doing well at the box office. “I have seen Manikarnika and I like it. Kangana’s performance has been quite superb. She is a thorough professional. It is a great sign that women-centric films are doing well. Buoyed by the success, I believe more and more filmmakers will shell out bigger budgets for female-centric films,” explains Madhur Bhandarkar and adds, “I have worked with Kareena Kapoor for a female-centric film, Heroine (2002), and I remember the film was praised for Kareena's superlative performance. So, I know the kind of satisfaction we get after coming to know that the film is doing well.”

Interestingly, although the film has been doing well and picking up the momentum, Bollywood still seems to be reluctant to give credit to Kangana. Mohit Suri couldn’t have agreed more and says that it’s time we genuinely give the film the credit it deserves, irrespective of the director’s gender. “It is about time that we give credit to Kangana for coming up with a fantastic film. If the film is good, let’s appreciate it.  I have worked with her for a couple of films like Raaz: The Mystery Continues, and know her very wel… Considering what all has happened to the film, I want to salute her for proving her mettle yet again with Manikarnika,” shares Mohit Suri and further adds, “But it is just that we are only looking at it now even though Bollywood has earlier produced such fantastic performances by the female leads earlier as well.”

Acknowledging that Manikarnika has posted better figures than Kangana’s earlier film, Tanu Weds Manu Returns, Trade Analyst Taran Adarsh states that the costume drama is the highest grosser in Kangana’s career. “Yes, Manikarnika is the highest grosser in Kangana’s career and the film also posted one of the best figures for a female-centric film over a weekend. Considering the film’s genre and the film’s Republic Day weekend, the film registered impressive numbers. The film is doing well in international markets too, grossing $1.55 million in earnings,” says Taran.

And to sum up things, film critic Anupama Chopra says that Manikarnika is a ‘well-made film and Kangana should be patted for her efforts.’

While Kangana has left for Europe for a holiday, the producers here are basking in the success of the film’s inspiring box office numbers. Director Krish who had earlier claimed that Kangana has turned his gold into silver is now thanking people for appreciating the film while continuing to slam the actress. Amidst the ongoing drama, Kangana’s sister Rangoli Chandel came to her defense and tweeted “@DirKrish chalo man liya you directed the whole film now please calm down, still, Kangana is the leading face of the film let her enjoy this moment of her success and great appreciation, please leave her alone, we all believe you now please take a seat.