Bollywood stars understand that life and death are part of a cycle and we must not let the latter stop us from worldly celebrations. 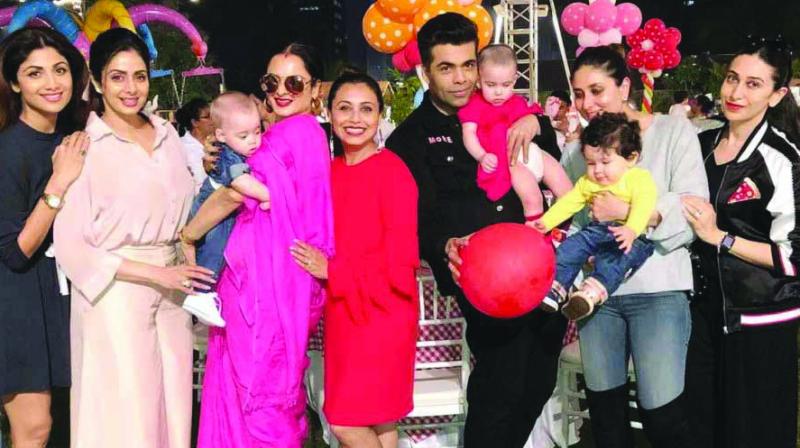 Moving on and letting go are concepts that are easier said than done. But, if recent occurrences are anything to go by, a bevy of B-town celebrities truly adhere to the adage that the show must go on. For instance, the news of legendary actor Shashi Kapoor’s demise sent out a blanket of grief among fans and those in the film fraternity alike. But, his death didn’t impede the Kapoor family from holding their customary Xmas lunch at the icon’s residence as they staunchly believe that life must go on. In fact, Shashi’s sons Kunal and Karan believe they are responsible to carry forward the tradition of hosting a sumptuous Christmas lunch for the entire family, which was introduced by their mother Jennifer Kendal decades ago.

Another celebrity who seems to vouch by a similar ideology is Rani Mukerji, who threw a private bash for her industry buddies to ring in her daughter Adira’s first birthday. Her dad breathed his last in October, but the popular actress decided to move on from the grief and went on to throw a private party for her little one’s first.

Also not overlooking the fact that Aishwarya Rai Bachchan’s father passed away early this year. While the actress has shared a very close rapport with her parents, she went on to celebrate daughter Aradhya’s birthday with full aplomb. These instances throw light on a rather interesting truth — that celebrities aren’t an insensitive bunch, but are practical enough to understand that life and death are a cycle and while their loved ones may die, their memories live on forever. We get experts to dive into this trend nonetheless.

Asserting how the approach is healthy and the way forward, Dr. Sourabha C, an independent researcher and sociologist adds, “These examples convey a rather important message, and that is how their perspective  of taking a gain or  loss is balanced. Hosting a private bash in the right spirit, keeping it private and low gives out a very healthy picture. There is actually very little sense in going overboard with the mourning.

Moreover, as a public personality, when you take decisions, it needs to be taken with due discretion, as you have youngsters watching you and wanting to ape you. The stars in question are well-balanced individuals who respect, value and get the meaning of moving on and respecting and valuing different relations. But my word of advice would be to keep it low, and be cautious in the arrangement.” Echoing similar views, clinical psychologist Priyanka MB believes that solution-focused outlook is the idea way to deal with losses and adversaries.

“It’s about going back to our roots, belief system and values. Life has a lot of challenges to offer irrespective of the position that you hold in life. But it’s our healthy thinking and coping that matter. What values and memories parents imbibe to their children during their formative years are what shapes their perspectives and personalities. The adaptability to be present with healthy emotional expression helps deal with turmoil and that’s exactly what these stars are trying to depict through such instances,” opines Priyanka.