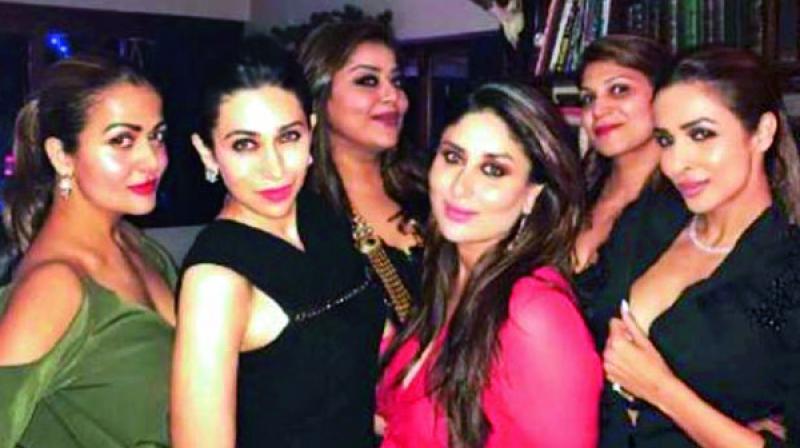 Kareena’s bestie, Amrita Arora, shared a few pics on her Instagram account. She posted the first image with the caption, “Theeeee girl gangggggg. Merry xmas. N we are backkk and massi Karisma Kapoor is also seen along. (sic)”

The girl has chutzpah. And in a good way! Not to be the one restricted by norms, Kareena Kapoor Khan, like the stunner she is, surprised fans when she was back on her feet, attending social gatherings, going to parties and getting clicked by the paparazzi, just days after giving birth to baby Taimur.

While women in India have been traditionally advised to follow certain practices like staying indoors for 41 days after giving birth, keeping away from the cold as much as possible by covering the ears with a scarf and some even believe in tying a tight band around their waists so they can get back in shape, Kareena was out and about on day three of her delivery.

Times are changing. gynaecologist Rooma Sinha says, “It is true that the first 40 days after delivery, the immune system of the mother is low. So that is something to be a little careful about, but one doesn’t need to confine themselves to the house.  As long as the mother is healthy, getting the right nutrition and is able to take care of the baby, there is absolutely no problem in stepping out. Unlike now, places and food joints outside were not hygienic or nutritional earlier. So, new mothers were advised to stay at home.”

Dr Pranathi Reddy, a senior consultant obstetrician says, “Pregnancy and childbirth are natural processes that take up a lot of the woman’s physical and mental stamina. Post delivery, confinement is traditionally advised by many communities worldwide, as it allows a woman to recover mentally and physically and bond peacefully with the baby and help establish breast feeding. While absolute bed rest is not recommended, there is a definite logic in allowing rest for the mothers. Tying a waist band helps protect the back by giving it firm support, but contrary to the belief, it does not reduce the tummy.”

Health is one area, but there is also a stigma attached. Some people may be worried about the evil eye, while some may talk of how a person should be staying at home, taking care of the baby. “I don’t think it is right to be judgmental. Every woman tailors her activity to the amount of support she has at home. If there are grandparents who can look after the baby, going out may be a welcome break as long as healthy habits are maintained. However, alcohol consumption and smoking is a strict no-no during this period,” Pranathi says.

Nikita Reddy, who gave birth to a son a year ago, resonates with Kareena’s decision. “I had stepped out after about 10 days after the stitches healed. 40 days is unnecessary.”