Kajol, during the promotions of her upcoming movie 'Helicopter Eela', met the two legends - Madhuri and Asha ji. 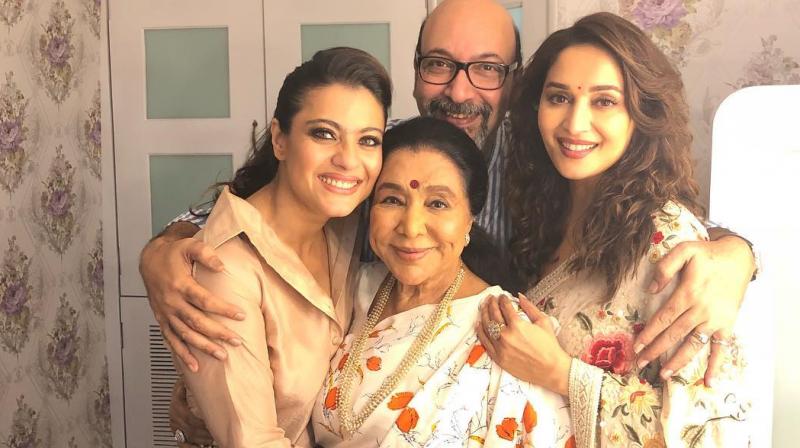 New Delhi: Kajol, during the promotions of her upcoming movie 'Helicopter Eela', met the evergreen actor Madhuri Dixit and the veteran singer with a golden voice Asha Bhosle.

The 'Dilwale' actor is leaving no stone unturned in promoting her upcoming movie even though the release date has been pushed back to October 12.

The Bollywood diva has been visiting the sets of several reality shows. The latest she visited was the sets of a dance-based reality show co-judged by Madhuri Dixit. The divas were joined by the legendary singer Asha Bhosle.

All of them looked beautiful and radiant as they posed together for the camera. Kajol was seen donning a shiny dusted shirt with a long ethnic skirt. While, 'Dhak Dhak girl' and Asha ji wore white sarees.

Kajol shared a sweet picture on Instagram, she wrote, "Aeeeeeeeeeeeeeee! Too kicked"

On the other hand, Madhuri captioned her picture with Kajol and Asha ji as, "Just love love love this pic"

Asha ji even sung a song for her audience and fans in Kajol and Madhuri, who instead turned mushy paparazzi, taking her videos.

She came... she sang... she conquered... and turned us into mushy paps for the legend @asha.bhosle ❤️❤️❤️

Reinventing the process of parenting, the comedy-drama witnesses Kajol as a single mother and an aspiring singer who joins her son, Vivaan's (played by Riddhi Sen) college to complete her education.

Also starring Neha Dhupia and Tota Roy Chowdhary, the film is directed by Pradeep Sarkar and produced by Ajay Devgn and Jayantilal Gada.