Theatre offered me an escape from mediocrity: Naseeruddin Shah

As the theatre collective, which had Shah, Gilani, Jairaj Patil, Akarsh Khurrana, and Ratna Pathak Shah as its first core members. 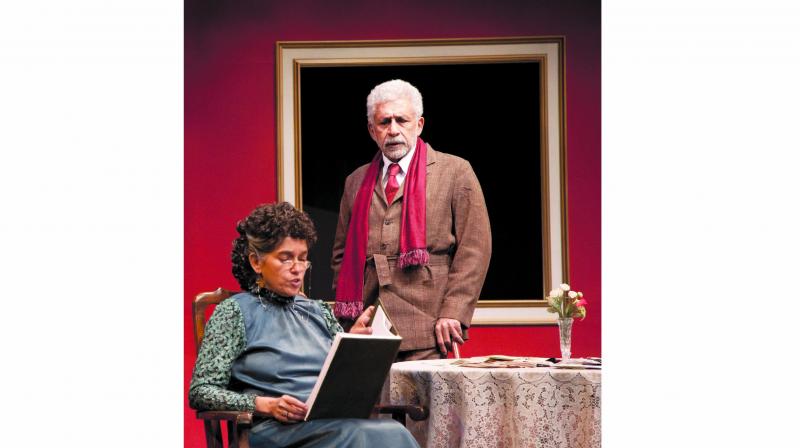 In the midst of the awadhi charm of Old Lucknow in 1978, actors Naseeruddin Shah and Benjamin Gilani had stepped out for a cup of coffee. The former students of National School of Drama (NSD) and Film and Television Institute of India (FTII) respectively, who were then shooting Shyam Benegal’s film based on the Sepoy mutiny of 1857, Junoon, had a little too much in common to discuss. One among the varied topic at that vivid meet was their shared love for the stage. So much so, that after completing the movie, the duo returned to the bay to put up a production of what’s logistically the easiest, and yet one of the most complex plays, Waiting for Godot by Samuel Beckett. And just like that, over a cup of coffee, the two became responsible for giving India its leading theatre group: Motley.

As the theatre collective, which had Shah, Gilani, Jairaj Patil, Akarsh Khurrana, and Ratna Pathak Shah as its first core members, turns 40 this July, Shah looks back fondly. “We were a bunch of actors doing what we loved. We had no illusions about achieving great things, we had no idea Motley would survive this long, we had no agenda except to educate ourselves and have fun doing it by performing plays we loved,” he says.

Soon enough, Shah and the band started staging some of the most elusive plays from the Western canon of literature, including the works of Anton Chekov, Harold Pinter, John Mortimer, Jean Genet, Eugene Ionesco and in one instance even William Shakespeare’s among others at the Prithvi Theatre. Although, for anyone who’s known the absurdist genius of the play Waiting for Godot, would not  be surprised to hear that the tagline of the ongoing theatre festival Motleyana is: ‘In Godot we trust.’ Talking about the play that started them off, Shah juxtaposes his love for Godot with Motley’s when he says, “We don’t perform it anymore; we still read it all the time. It’s easily the greatest play written in the 20th century and probably in all time. I definitely don’t claim to understand all of it but one doesn’t have to understand music to enjoy it. Godot is a symphony of words. The journey with it has been like the journey of our lives over the last 40 years. I don’t know who coined, ‘In Godot, we trust’ but I thought of using it as a motto.”  Among the repertoire, his favourite is Androcles and the Lion, but  he quips, “No one saw it.”

While Motley’s English plays have always had a niche audience grappling at the ticket booth, it’s, in fact, their Hindustani plays Ismat Apa Ke Naam, Aurat Aurat Aurat, and Manto Ismat Hazir Hain, among others, that create a frenzy among the theatre-goers. However, contrary to what one would expect, it wasn’t before 2000, that Motley opened doors to Indian Literature. “I felt the urge to perform in my own language and play characters that are Indian. My interest in Urdu had been revived after doing Mirza Ghalib (television series), and so I opted to stage stories because of Urdu or Hindi plays are few and far between, the ‘good’ ones have been done several times and frankly, they don’t stand the test of time,” reveals Shah.  For a while, the thespian toyed attempting Vijay Tendulkar’s Ghashiram Kotwal, but a definitive production of that had been done years ago in Pune. So as luck would have it, he discovered Ismat Chughtai and through her several other Indian writers, namely Premchand, Manto, Phanishwarnath Renu, and Harishankar Parsai. “I’ve staged several works of these giants and it has been an education for me in appreciation of Indian literature,” he adds.

Forty years may have gone by in a flash, but for the 69-year-old theatre veteran, Motley’s success, and survival is owed to their genuine dedication to the texts and its absorbed translation on the stage. “Our survival is due more to our obstinacy in continuing to perform what we prepare rather than due to great success, and the reason we persist with them for so long is because great writing is truly inexhaustible and the more we study these texts, the more we find in them,” says Shah whose preoccupation lies in making a piece of theatre stimulating for both the actors and the audience. Moreover, he insists that the relationship between actor/director and text must be one of regard, not reverence. “No one has the right to tamper with the written words unless you’ve worked on them at least as hard as the writer had. I detest actors who start ad-libbing before they know the text,” he adds.

Shah, who has been a student of a strict disciplinarian theatre teachers Ebrahim Alkazi and Satyadev Dubey accredits to the two Indian theatre giants to have taught him whatever he knows about stagecraft, but also quips, “I’ve inherited some of the only things they had in the common—a propensity to get hysterically angry with actors!”

He has been a part of some of the most critically acclaimed movies in the Indian cinema, but theatre has always been closer to his heart. “I never quit working in the theatre even at a time when I was shooting for several (terrible) movies simultaneously. That was a time when I thought I was condemned to spend my life doing second-rate commercial movies, luckily theatre offered me an escape from that mediocrity because in theatre, one can engage with the greatest writing of the last thousand years, he reveals. “It’s futile to hope for a Samuel Beckett or Bernard Shaw to emerge in our dear Follywood. And as for ‘crossing over’ from one to the other, I don’t think there’s a great difference between acting in movies and in the theatre. Acting in larger than life movies, however, I have always found difficult and I’ve never quite cracked that technique,” he concludes.

The Motley festival will be happening at Veer Savarkar auditorium, Shivaji Park from August 6 to 10.