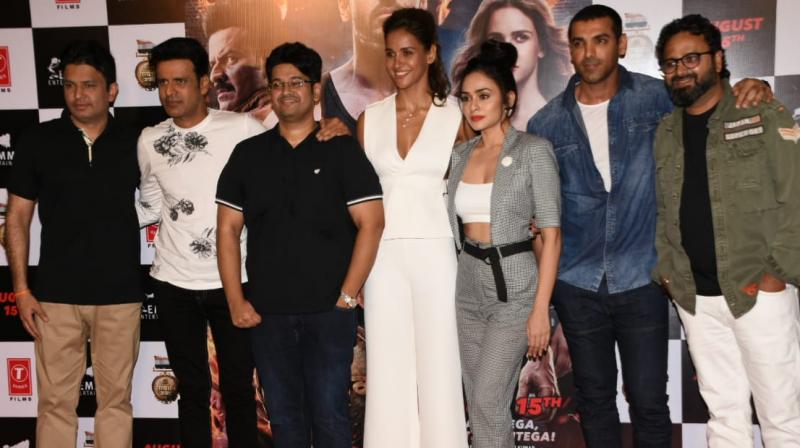 Mumbai: 'Satyameva Jayate' has been in the news for the song recreation of 'Dilbar' featuring Sushmita Sen and Sanjay Kapoor. This time the song will feature Nora Fatehi's belly dancing.

The trailer of the 15th August release was unveiled among Manoj, John, Milap, Bhushan Kumar of T-Series, Aisha Sharma and Nikkhil at a suburban theatre today.

There Nikkhil revealed a detail of the film saying, "Atif has sung a song in the film. I didn't even know that, but Bhushan ji informed me that it's done."

The trailer of this film has a scene where Aisha is fighting a man on John's insistance. Speaking about the scene, John mentioned, "Your character needs to be relatable even with women."

Director Milap Zaveri adds, "John was my total inspiration for that scene. He felt women should also be shown in same light as a man."

Not only Milap, John's co-star Manoj Bajpayee was also praises for him as the veteran actor said, "People change every Friday, but John Abraham remains the same."

Manoj was last seen in another story of a man in uniform 'Aiyaary'. He spoke, "For me, it is important to see what the character in the uniform does than the uniform."

The movie deals with corruption. So when asked if anybody from the team faced corruption, John was quick to answer, "It's very difficult for me to get into any kind of bribery. My dad told me not to cheat and hurt anybody. So we follow that sincerely."

They were also asked about doing a movie on surgical strike. This time Manoj took the mike to say, "Only few scripts enhance real stories. If a script is great, any actor would love to do a film."

Along with 'Satyameva Jayate', Akshay Kumar's 'Gold' also hits the theatres. Milap pointed out the difference between the two films saying, "This is a commercial, not only patriotic film like 'Gold'. We have action, comedy, romance as the subplot."

The movie also stars Amruta Khanvikar, who is celebrating 'Raazi' success. She will play Sarita in the film and is cast opposite Manoj Bajpayee.