Kaushal tells if he is playing Kumar Gaurav or Salman Khan as Dutt's friend in Ranbir Kapoor starrer ‘Sanju’. 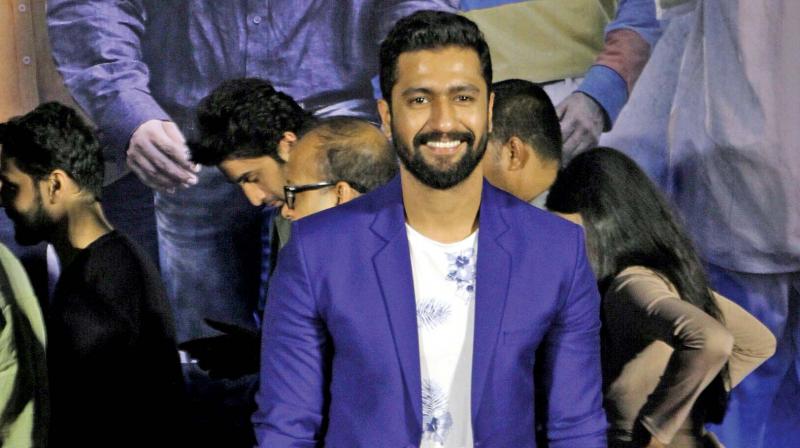 Mumbai: Vicky Kaushal is one actor who plays lead roles in Masaan, Raazi and many other films. But he is always open to playing pivotal roles as well in films. Vicky indeed looks forward to playing varied and important roles....Having pocketed playing the husband of none other than Alia Bhatt, he is now playing a great role in the most awaited film ‘Sanju’, Sanjay Dutt's biopic.

Vicky Kaushal is basking in the success of his latest flick with the success of ‘Raazi’ About his experience, he says, “It feels happy and nice. This change has added us in the league of more than 100 crs club. More than being in this elite club of 100 cr, the response we received from the critics and from the people unanimously praising the film was something which makes us feel great. When during the first weekend we came to know about the shows being houseful, this was something that was a pleasant surprise for us. Even during the weekdays at a later stage with “Raazi” having full shows did bring in loads of happiness to all of us.”

So is he playing Kumar Gaurav also a pinch of Salman is there in the film ‘Sanju’ on par with his character to this Vicky confirms, “I play a Gujarati friend of Sanjay Dutt who knows him from his youth hood days. His name is Paresh and has shifted to USA. Also there is a mix of a few other friends too. But I do not know who? Kumar Gaurav toh nahi hai! Also about Salman I have no idea.”

Being the son of a well known action master he says, “Indeed I am happy that my mom and dad agreed to my idea of working in films. So after giving successful films my parents’ mom and dad are quiet satisfied. As we all know, this profession is insecure. I am happy Mom dad are the ones who immediately send me an SMS…though my room is just next to them but mom feels excited when she reads my articles and informs me first. They feel excited and happy, wherein, I feel contented that at least I am able to bring little smiles on their faces.”

“Sanjay Dutt invited me on one of the Diwali, after the completion of the shooting Sanjay Dutt invites me for Diwali party. This was the first time for me to meet Sanjay Dutt  so closely. Undeniably, I was in awe of him and just kept watching him until the time I was there. I was shocked to see a unique combination in him he has a child like clean heart, full of emotions. He is not only strong but equally vulnerable. Talking to him, at some point of time you may feel that his tears will start rolling. He is an emotional person,” Vicky tells.

Since Vicky and Ranbir became close buddies so we quiz did Ranbir share something about his latest love? He smiles and says, “Yes, I and Ranbir would share long conversations…discussed our personal as well [professional life. The very first rule of being sincere friends is never share anything that your friend may have confided in you and informed. [Mera sabse pehl eassol ko manta hooon…kisi ko kuch nahi  batana chahiye.”

Vicky’s links up stories have never made headlines with any of your heroines not even with Allia Bhatt why? He laughs aloud and says, “Aap kyu nahi kuch karte mam…aap ko kuch link ups krne chahiye mere!! Oh my God kal jb mein yeh paduga toh yehi soochunga ..yeh kya bol gaya mein?? [Why don’t you do something about my link up stuff ma’am? Oh! My God what have I said? Tomorrow when I will read this answer of mine I will feel shocked myself!,” He concludes.