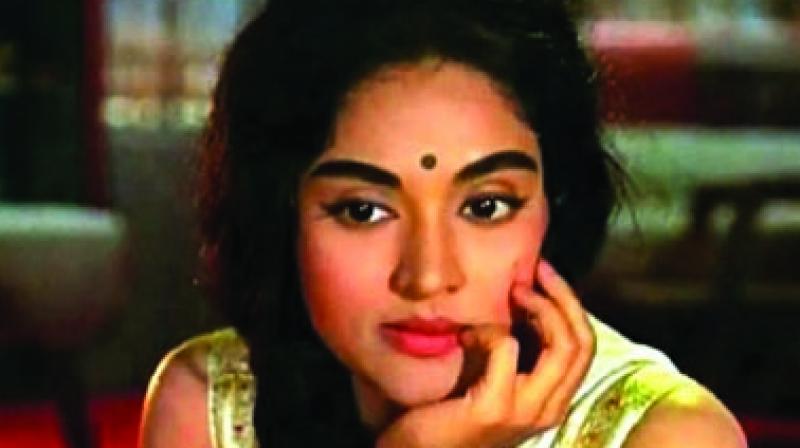 She is known to be the first female super star of Indian Cinema. Big stars like Dilip Kumar, Ashok Kumar, Rajendra Kumar, Raj Kapoor and Dev Anand waited for months to get her dates so that she could be their co star. She is the original Chandramukhi of Bollywood, who mesmerised us for over two decades with her fabulous acting and astonishing dancing skills. Yes I am talking about the Nagin herself, Vyjayanthimala.

You all know her as the charming actress but to me Vjayanthimala is family, she is my mami (my mother’s cousin brother Dr Chamala Bali’s wife) who we meet with stars in our eyes. Recently, this 82-year-young diva performed Bharatanatyam at the Kamani Auditorium in New Delhi, for the Pandit Chaturlal Memorial Society in celebration of the 90th birth anniversary of the tabla wizard.

It was because of her that Indian film actresses were expected to know classical dance. She was the first  Indian actress from South India to become a Hindi film star and carved the way for other south Indian actresses’ foray into Bollywood.

Also known as the Madhumati of Bollywood, Vjayanthimala is the one who introduced semi-classical dance to Bollywood. She danced with so much gusto, energy and charm that her dedication won her the title of “twinkle toes”.

The legendary dance number Hothon pe aaise baat mein daba ke chali aaye, from her film Jewel Thief with Dev Anand is a lesson for not just choreographers and dancers but also for cinematographers and dress designers.

She exudes innocence in the song Saiya dil mein aana re, aake phir na jaana re (film Bahar), and shows her sensual side in Bol Radha bol sangam hoga ke nahi (film Sangam). From her puppet dance on the song Bol re Kathputli dori kaun sang bandhe (film Kathputli) to her most hypnotising moves in film Amrapali still rule our minds and hearts.

Not many people know that Vyjayanthimala was five years of age when she performed Bharatnatyam before Pope Pius XII (her mother Vasundhara Devi was at the Vatican then). But in all humility she dedicates all her dancing skills to her Goddess.

“I never dance it is that goddess of mine who makes me dance and it is this other me, who attempts the movements,” she says whenever she is appreciated for her dancing skills.

Though Vyjayanthimala gave up acting after her marriage, she didn’t give up Bharatanatyam which she continues till today.

Recently, when she was asked to look straight at the camera for a paparazzi picture, her ever so speaking kohl-rimmed eyes widened, she looked at the cameraman, smiled and said, “Mein dancer hu, meri aakhe bolti hai, agar tum budhu na samjho toh mein kya karu.” (I am a dancer, my eyes speak, now if you don’t understand, then what can I do) Oh that sensual charm indeed was the one that held Devdas’s attention when Chandramukhi lifted her eyes, or captivate Devendra when the ghost of Madhumati beckoned him.

She announced her arrival in tinseltown when she danced down the hill on the song Mera Maan Dole, Mera Taan Dole  in the film Naagin to composer Hemant Kumar’s famous piece on a snakecharmer’s been and there was no looking back for this charmer ever since.

She always spoke her mind and expressed her heart without mincing words, which many times did create a controversy. Following are excerpts from a small chit-chat I recently had with her:

As a new comer in the industry you refused Filmfare Award for “Best Supporting Actor” in Bimal Roy’s Film Devdas (1955) opposite Dilip Kumar. And it became the biggest new ever isn’t it?

I gave it all I had to my character of Chandramukhi. It was the role of a lifetime, I still believe that Devdas had two main lead actresses, Suchitra Sen (Paro) and me — and Chandramukhi was not a supporting role.

We all want to see you on screen but you refused some iconic role in films like Deewar, Aandhi, Sapno Ka Saudagar, Kranti and many more. Why are you depriving your fans?

It is not about depriving my fans, I did not want to play Indira Gandhi inspired role in Aandhi nor did I want to be a mother to Amitabh Bachchan in Deewar, I am a heroine and I want to be known as a heroine only.

Bharatnatyam is your first love, what does it really mean to you?

To me Bharatnatyam is the dance of the devdasis and when I present my dance I like to present it in its purest form, without any frills and flounces.

What are your views on today’s new-age dancers?

I am sorry, I cannot stand the concepts of fusion, to me fusion is total confusion.’

Vyjayanthimala learnt dance under some of the finest gurus, including K.P. Kittappa Pillai and Mylapore Gowri Amma.

The writer is a World Book Record holder, a well known Ballroom dancer and a Bollywood choreographer who has been honoured with two National Excellence Awards and one National Achievement Award by the Govt of India. He can be contacted on sandipsoparrkar06@gmail.com