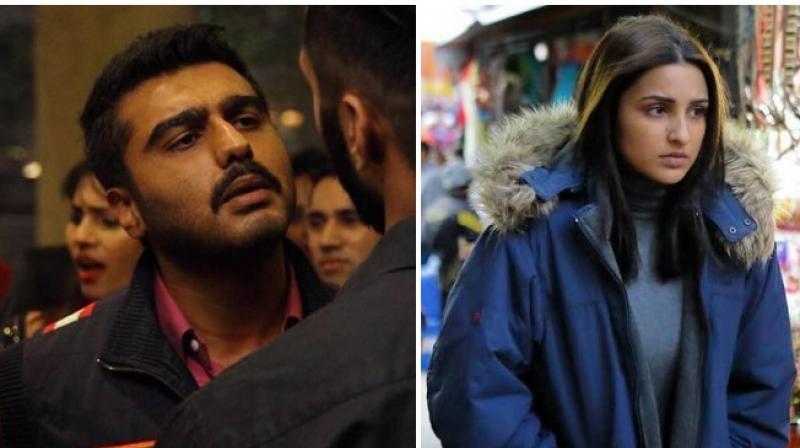 Mumbai: Arjun Kapoor and Parineeti Chopra have spent months finishing shooting of YRF’s Sandeep Aur Pinky Faraar - the most challenging shoot schedule of their career. From shooting in bone-chilling climatic conditions near the Indo-Nepal border, to Arjun’s gruelling three-month training with the cops, to Parineeti lying down in one spot for six hours in freezing cold on a mud floor without eating or drinking, to taking local trains and braving mobs, to living in tents while shooting at the border, to trekking hills – Arjun and Parineeti have showcased incredible commitment as actors to shoot this gritty, edgy, realistic thriller.

“Arjun Kapoor can't stop doing retakes even in conditions that are immensely challenging. We're shooting a very intense scene in a deserted field in the middle of the night in freezing cold. The whole crew is in three layers. Arjun and Parineeti are dressed for a mild-September evening. It's a stunt scene where they have to fall repeatedly on the cold hard ground. Arjun gives eighteen takes of falling on his back (which is injured anyway), while carrying Parineeti’ s weight on him all the time. In the confined backseat of a car, where he can't even turn properly, he's holding a gun, Parineeti, acting, emoting, while protecting Parineeti from physical injury where the scene is about him roughing Parineeti up! I challenge anyone to do this at 50 km/hour on the Delhi-Gurgaon highway and still give a stellar performance - like he did. We couldn't have finished this film on schedule without his absolute focus and courage under fire. Very, very cool, and very generous to his co actors and the crew - while totally focussed on his craft,” says Dibakar.

These photographs capture the world of Sandeep Aur Pinky Faraar, an entertainer that is set to release on August 3rd. Remote, and real, these locations form the backdrop of the story and highlight the thrill and intrigue! Arjun and Parineeti seamlessly blended into the scenes, looking and acting their parts to the T.

Dibakar adds, “We are in this small mud hut somewhere seven thousand feet up in December. Parineeti has been lying on the floor for about two hours in freezing cold as we set up shot after shot. The camera is looking down on her from six inches away. She is supposed to be unconscious. She came to the set not having had breakfast, not slept the night before, and not drunk any water. The makeup happens while she's lying down and then she has to shoot lying still in the freezing cold for six hours. Then in the falling sunlight she has to scream out loud take after take till her voice goes completely.”

He adds, “Then she gives another shot where she is supposed to talk, and do a very dramatic scene while the unit is screaming to get the crowd out of the rapidly setting sun. Then she gives another shot, lying down in the night, eyes closed, unconscious - a fly settles down on her face, not a twitch. I get a long, still shot of an unconscious person with a fly on her face. Parineeti finishes the take and grins and says ‘makkhi ne acchi acting ki.’ Now, she has a two hour car ride back to the hotel that does not have any in room heating. This was a typical day for fifty days on the sets of Sandeep aur Pinky Faraar. Parineeti Chopra is world-class.”