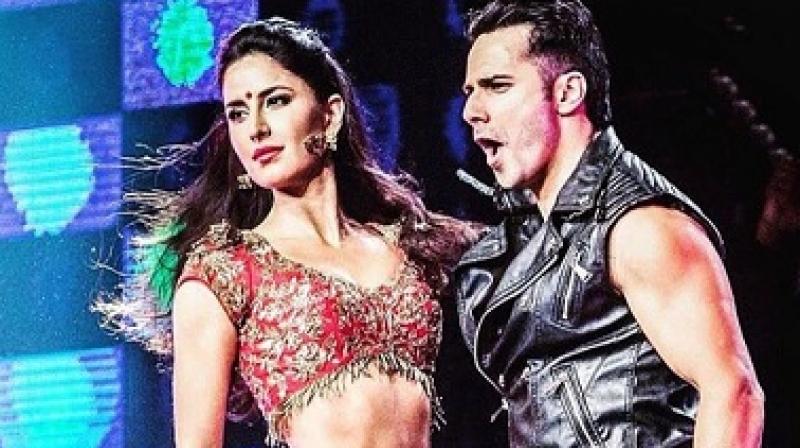 Katrina Kaif and Varun Dhawan in a performance.

The team released an announcement video which read ‘The Gang Is Back’ and also mentioned that Prabhu Dheva is part of the film (who was the mentor in both ‘ABCD’ and ‘ABCD 2’).

But the makers never revealed the title of the film which is undoubtedly a part of the ‘ABCD’ franchise and we know why they are mum.

A source exclusively informed us, “‘ABCD’ and ‘ABCD 2’ were produced by UTV Motion Pictures, and now T-Series has come on board for the Varun and Katrina starrer. The makers still haven’t acquired the rights of the film and hence there’s quite a possibility that the movie will not be titled ‘ABCD 3’.”

Remo D’Souza became a known name thanks to his franchise of ‘ABCD – Any Body Can Dance’.

The director had roped in Varun Dhawan and Shraddha Kapoor for his second instalment, which also went on to become a super hit.

Post the film, Remo recently turned the director of ‘Race 3’, replacing Abbas Mustan from the first two instalments. The movie stars Salman Khan and Jacqueline Fernandez in the lead roles with Daisy Shah, Bobby Deol, Freddy Daruwala and Saqib Saleem as the new faces apart from Anil Kapoor from the series.

It was being speculated since long that post ‘Race 3’, Salman and Remo will be collaborating for a dance movie which was going to tentatively be titled ‘Go Daddy’.

However, it is being believed that Salman will play a cameo in the Varun and Katrina starrer, which can be expected since Varun, Katrina and Remo are already comfortable working with the superstar.

The untitled film, a franchise of the ‘ABCD’ franchise, is slated to release on 8th November 2019. But there’s very little chance that the movie will actually continue with the ‘ABCD’ title.

You can however expect it to be ‘ABCDE’ maybe, which is a trend the makers of ‘Haseena Parkar’ (changing name from ‘Haseena’), ‘Singh Is Bliing’ (from ‘Singh Is Kiing’) and ‘Namastey England’ (from ‘Namastey London’) have followed.