Doting dad Tusshar Kapoor gets back to work

A doting dad to the hilt, Tusshar says that his son is a balanced kid. 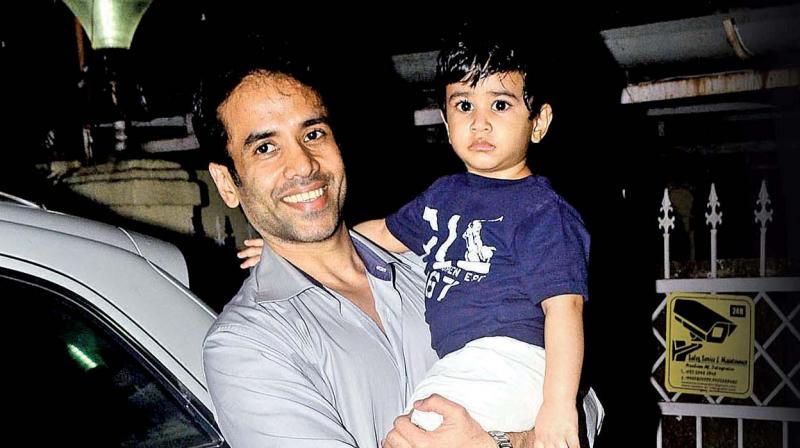 Tusshar Kapoor announced in 2016 that he had become a father through surrogacy, to a baby boy named Laksshya.

Tusshar Kapoor announced in 2016 that he had become a father through surrogacy, to a baby boy named Laksshya. The little tot has been the actor’s sole focus for the past few months, and barring Golmaal Returns, the actor hasn’t been doing any other movies.

Now, Tusshar is on the verge of signing a new web show. “It’s in the comic genre,” he confirms. “I will be signing it soon.  Tusshar has been active on Instagram, posting his special moments with Laksshya, meanwhile. “I spend a lot of time with him, and hence have some great moments. It’s better to save them online,” smiles the actor.

A doting dad to the hilt, Tusshar says that his son is a balanced kid. “He’s not really naughty, but he’s not a quiet one either and plays all day. He’s very happy and involved in a lot of things, because he’s restless. He draws — but not on walls yet — runs around and plays with the ball. In fact, everyone in the house wants to get a new bulletin about him all the time. Is he playing, eating, sleeping or going out,” laughs Tusshar, saying his house isn’t quiet anymore.

The actor says that his parents do believe that Laksshya looks a lot like he did as a kid. “My parents do say that. But there’s no comparison to our activities. Kids are a lot more expressive today, because of the exposure they have. They also take a lot of decisions themselves, even at this young age,” he signs off.