For the 90’s leading pair Anil and Madhuri, who will be reuniting on screen after 19 years in upcoming Total Dhamaal. 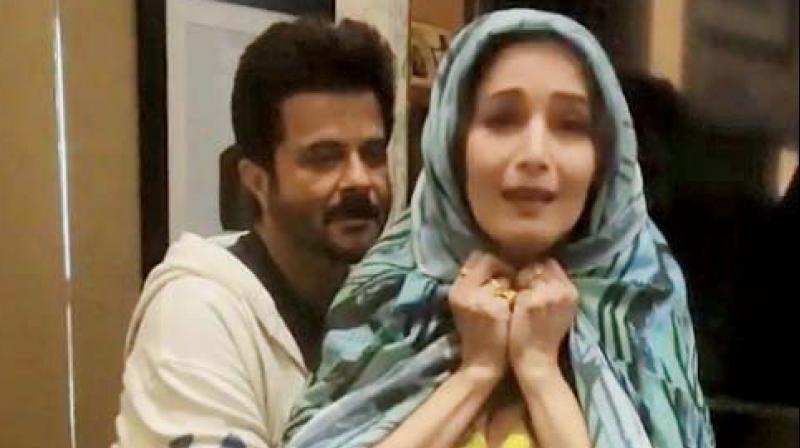 A grab from the video Madhuri posted

The 1989 blockbuster hit Ram Lakhan not only gave us the iconic song My Name Is Lakhan paired with its rather quirky choreography, but made Madhuri Dixit Nene (then Madhuri Dixit)’s career. The principal cast including Anil Kapoor, Jackie Shroff, Dimple Kapadia, Amrish Puri, Raakhee, Anupam Kher, and Madhuri breathed into Subhash Ghai’s direction such magic, that even thirty years later, the movie is fondly remembered and loved.

For the 90’s leading pair Anil and Madhuri, who will be reuniting on screen after 19 years in upcoming Total Dhamaal, Ram Lakhan surely holds a special place in their hearts. It is perhaps why, to celebrate 30 years of the movie, the duo recreated their roles and chemistry from the movie in a short video uploaded on Instagram by the actress.  In the video, Anil and Madhuri are seen dancing on Bada Dukh Dina O Ramji and My Name Is Lakhan. “Today marks #30Years OfRamLakhan and dancing on this song brings back so many beautiful memories. It was fabulous working with the team of #RamLakha???? @anilskapoor @subhashghai1 @apnabhidu #PareshRawal @anupampkher,” wrote Madhuri.

Anil and Subhash Ghai also took to the site to celebrate three decades of the movie. Anil uploaded a picture in a tuxedo re-enacting the dance-move. He captioned it, “#30yearsofRamLakhan & it's been one of my greatest joys to watch Lakhan continue to bring a smile to people's faces, & and a dance in their steps...I'm not one to look back & ponder, but as I move forward to new avenues, I'm grateful for the choices that got me here...#LakhanFTW!