Video: Rani Mukerji asks Sourav Ganguly of his Hichki, his response will amaze you

The actress started her promotions during Makar Sankranti, and she has been going to Television shows. 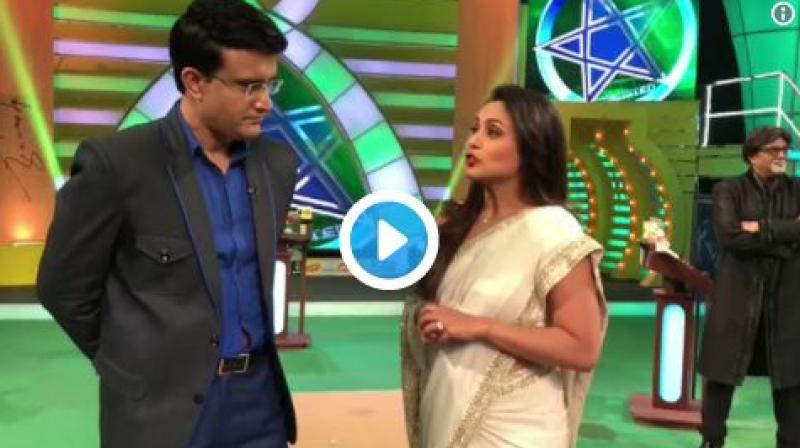 Screenshot of the video from Rani Mukerji and Sourav Ganguly's video. (Photo: Twitter)

Mumbai: Rani Mukerji is on a promotional spree for her upcoming movie ‘Hichki’. The actress started her promotions during Makar Sankranti, and she has been going to Television shows (including ‘Bigg Boss’ in the past) for the same. The latest one this actress visited was ‘Dadagiri’, where she caught up with her Bong friend, cricketer Sourav Ganguly.

Rani, in a pretty saree and minimal make-up, was a treat to the eyes. The show also saw Amitabh Bachchan’s duplicate, as can be seen in a video shared by the Twitter page of Rani’s movie ‘Hichki’. In the video, Rani can be seen asking Dada about his ‘Hichki’ on the cricket field. His answer will honestly win you over. Watch it in the video here:

Rani plays the character of Naina Mathur who has a nervous system disorder, Tourette Syndrome that forces an individual to make involuntary repetitive movements or sounds in the movie which is slated to release on February 23, 2018.

When Rani was asked about her comeback earlier, the actress stated, "I was looking for a script that would challenge and excite me, and ‘Hichki’ came my way. Each one of us has a weakness that pulls us back, it could be a disability or any condition but if we just look at it as simply a hiccup, we can emerge as a winner. It won't come in the way of achieving your dreams. ‘Hichki’ is built on this positive premise and I have decided to take it up."