The trailer of one of the most anticipated films of the year is out, and it looks a blockbuster all the way. 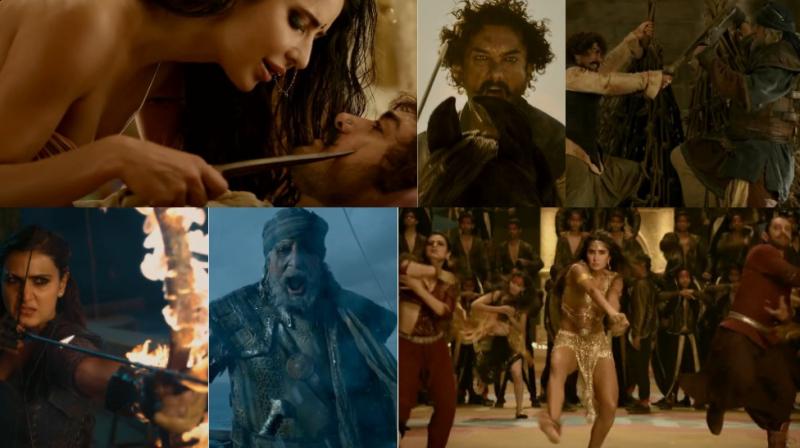 Screengrabs from ‘Thugs of Hindostan’ trailer.

Mumbai: It’s out! The trailer that everyone has been waiting for has finally been unveiled and ‘Thugs of Hindostan’ surely lives up to the hype.

As seen in the trailer, the story is about ‘Thug’ Amitabh Bachchan aka Azad and his protégé Zafira, played by Fatima Sana Shaikh, who take on the Britishers, in the 1800s with their skilled tactics.

The rulers are in no mood to let go and want to get hold of Azad at any cost get the scheming, goofy and street smart Aamir Khan aka Firangi for the task, who joins forces with Big B’s team.

Firangi doesn’t quite succeed in his secret mission, and it’s a face-off between Aamir and Big B when the latter comes to know of the betrayal.

Aamir has already been tagged as a ‘Desi’ Jack Sparrow aka Johnny Depp since his look was revealed, and the trailer reinforces that fact, and similarities with ‘Pirates of the Caribbean’ franchise are obvious with most action sequences taking place on ships.

Aamir’s comic avatar might just remind you of his other memorable performances in films like ‘Rang De Basanti’ and ‘Rangeela.’

Katrina Kaif’s Suraiyya is only for the glamour quotient, and she looks sultry in at least two tracks which might give ‘Sheila Ki Jawani’ and ‘Chikni Chameli’ competition. Her chemistry with Aamir is likely to be among the highlights.

Fatima looks impressive with the armour, firing the bow and the focused attitude, but doesn’t speak and Big B, along with eyes on the enemy, does most of the heavy-duty ‘dialoguebaazi’ which he’s a pro at.

The film is basically about the action and with swords, knives, arrows, bombs and guns all around, a visual extravaganza seems guaranteed.

‘Thugs of Hindostan’ is written and directed by Vijay Krishna Acharya, produced by Aditya Chopra’s Yash Raj Films and is based on Philip Meadows Taylor's 1839 novel 'Confessions of a Thug'.

‘Thugs of Hindostan’ releases on 8 November.