They feel women have come a long way and it is their right to be the way they want to be. 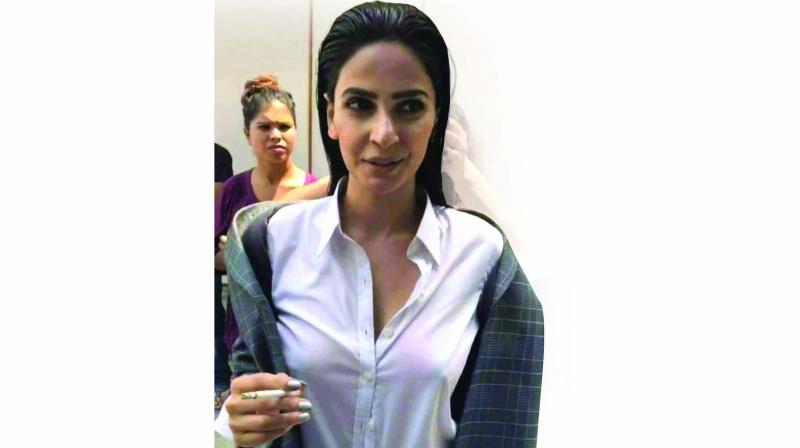 Trolls spewed venom and viciously attacked Pakistani actress Saba Qamar after photographs of her smoking during a shoot went viral.

In yet another incident of moral policing, famous Pakistani actress Saba Qamar became the newest victim of trolls after photographs of her holding a cigarette in one hand and wearing a slightly revealing shirt were leaked online and went viral. The backlash was swift and sharp. And some of the online haters reacted to these behind the scenes images of the Hindi Medium actress by questioning whether she was “even Muslim anymore”.

Many of her colleagues defended her and came out in support of her. And many feminists and supporters of gender equality spoke up against such vicious online trolling. “Celebrities tend to become role models whether we like it or not. They are under constant scrutiny when in public. The media can take a toll on one’s psychological health. There is a constant vulnerability owing to the detrimental effects of being in the spotlight. Being a woman and a celebrity is even more minutely observed by women and men alike in public. How one dresses and behaves is constantly judged. In general, there is a certain rigid societal decorum that dictates how women have to dress and behave in public. Although there is a growing acceptance of equality between men and women, unfortunately misogynistic beliefs still exist.

Such moral policing and gender specific criticism sharply go against an individual’s freedom to live the way she wants to, feel many women. They feel women have come a long way and it is their right to be the way they want to be. Supporting this thought is Preet Karnawal, model, actor and social activist. She says, “One of the finest actresses has become a target for trolling from netizens after a picture of her smoking and wearing revealing clothes went viral. Observation says those were BTS images clicked in the middle of the shoot when she was changing her clothes and spread purposely by some creeps to shame her. She is mature enough to know what’s bad or good for her. She is an actress and should be judged on her acting skills rather than on some flawed moral and religious logic.”

While most women stand unanimous in their criticism of such moral policing and trolling, some also feel that a public figure needs to exercise an added degree of caution and shoulder the responsibility that comes with being a role model of many. Social thinker and motivational speaker Deepti Pathak feels, “While I am definitely against moral policing, I do feel that as a social figure one has a responsibility towards the image you leave on young impressionable minds. Having said that, the lives of celebrities are devoid of privacy in this age of camera phones and civilian paparazzi. She was at a set, playing a character and away from prying eyes. If something like this has to leak and make it to social media, people need to consider its antecedents and empathise with the ‘victim’ rather than troll and moral police her.

As for the hullabaloo by people who have taken so much offence over a lady smoking, I seriously hope they change their outlook and realise that we are in the 21st century where men and women have equal exposure. If one gender can be flawed by a bad habit so can the other.”

On another note, Aanyaa Oberoi, a social thinker, feels, “Today, we are living in the generation of internet. Upgrading ourselves with the latest technology to match up with the world exists but one thing we are not upgrading is our ideology. In today’s era a women deserves equal rights. We all love and laugh reading the trolls but there’s a very thin line between healthy trolling and excessive trolling. Excessive trolling can cause severe depression. Are we just using the internet as an easy way to take out our frustration and anger on others?”