Watch: SRK thanks fans outside Mannat as he completes 25 years in Bollywood

SRK had his son AbRam alongside as he thanked fans outside his bungalow Mannat and conveyed them Eid wishes. 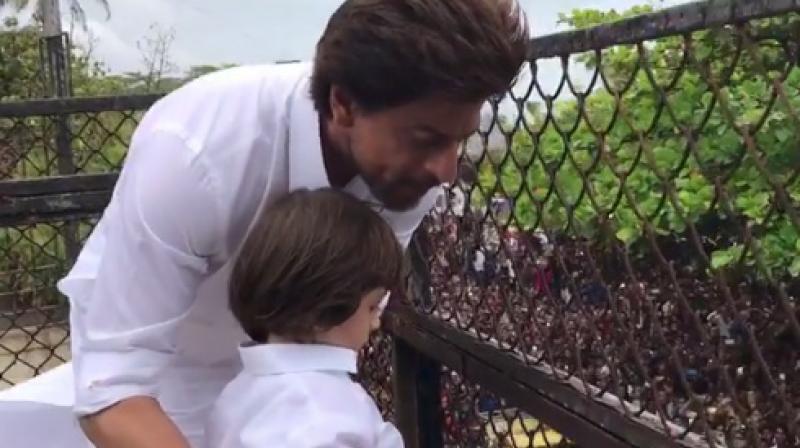 Shah Rukh Khan and AbRam outside Mannat on Monday.

Mumbai: The younger lot of actors like Varun Dhawan, Ranveer Singh, Ranbir Kapoor, among others have earned popularity in recent times, but it is unlikely that we could ever see them enjoy the popularity of Shah Rukh Khan, Salman Khan and Amitabh Bachchan.

These three superstars are perhaps the only ones to be greeted by massive numbers of fans outside their houses. And when they come out to wave at them, we can be sure that the traffic outside the area would be blocked at least till they go back inside.

A visual traced beautifully in Shah Rukh’s’ Fan’, we saw a massive crowd gathered outside Mannat on the occasion of Eid on Monday.

The superstar himself posted the video on Instagram, waving and blowing kisses at the fans who were gathered outside his and were cheering for him.

This time, his son AbRam also joined in, waving at the fans, sitting in the arms of his father.

SRK interacted with the media on Monday, with Eid becoming double special for the superstar as he completes 25 years in the industry since the release of his debut ‘Deewana’ in June 1992.

Shah Rukh will next be seen in ‘Jab Harry Met Sejal’ which is releasing on August 4.

‪Eid Mubarak! Thank you for making my day special. And thank you for joining me on this glorious journey of 25 years. Love you all...‬