The way Rajamouli spoke about Baahubali issue made me feel very sad: Sridevi

The vetaran actress denied the filmmaker's allegations of her making unreasonable demands for doing 'Baahubali.' 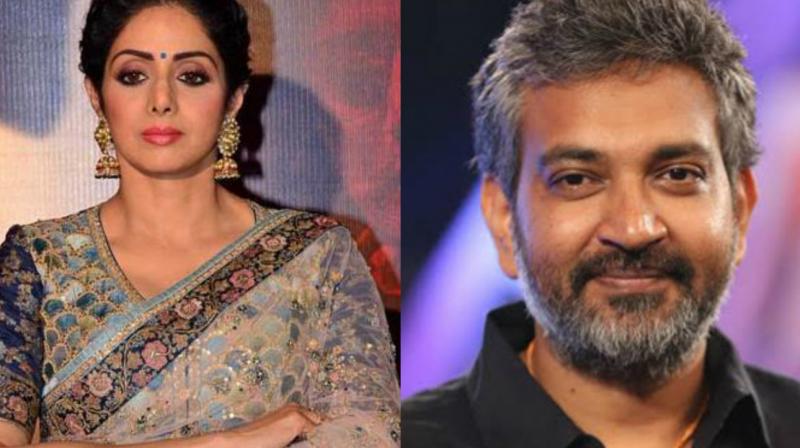 Seeing two talented artistes like Sridevi and Rajamouli coming together on the same film would have been a treat for fans.

Mumbai: It is a known fact by now that it was not Ramya Krishnan but Sridevi who was the first choice for the popular character of Sivagami in the record-breaking franchise 'Baahubali.'

With the promotions of her upcoming film ‘Mom’ underway and multiple interviews lined up, questions about ‘Baahubali’ were inevitable.

In one of these interviews, the veteran actress finally confirmed that she had indeed turned down the film, and without revealing much, had added that she had her own reasons for doing so.

She said, “But I would like to talk about this. It has become such a big issue and people are imagining things [as to why I have said no the film]. I have my own reasons. First of all two parts of Baahubali have come out, and now they are asking me. There are many films, I refused. Why are they not talking about it? Why only this film? I will go there and talk about it.”

Sridevi has now spoken about the acclaimed director of the ‘Baahubali’ franchise, S S Rajamouli, in one of her recent interviews.

The actress says that she felt shocked and saddened by the comments the filmmaker made against her after they couldn't collaborate on the film.

She told NTV Telugu, “I was shocked and hurt by his interview. Rajamouli is a calm and dignified person. I was very happy to (have got a chance to) work with him. But, the way he spoke about the issue made me feel very sad.”

Reports of Sridevi demanding high fees being the reason for her not doing the film were anyway doing the rounds. And Rajamouli had almost confirmed it in an interview to a leading daily, where he was quoted as saying, "After hearing series of wishes from her (Sridevi), our team got fed up. We also thought that it would be above our budget to meet her demands. Then we approached Ramya Krishnan and she proved herself fantastic and we now feel, we were lucky that we dropped the idea of having Sridevi in our film."

On monetary issues proving the decisive factor in this situation, Sridevi said in this same interview, “People would have sent me packing if I was like that. I don’t know if the producer wrongly told Rajamouli that I made all these demands but it is not in good taste to speak like this.”

For whatever reasons the duo didn’t collaborate and taking nothing away from Ramya Krishnan, watching Sridevi in a film like ‘Baahubali’ would have been epic.