Entertainment   Bollywood  27 May 2018  Videos: After Anushka and Tiger, Varun and Sushant take up the fitness challenge
Entertainment, Bollywood

Videos: After Anushka and Tiger, Varun and Sushant take up the fitness challenge

Hrithik Roshan had also taken up the challenge, but it got backfired for his irresponsible behaviour. 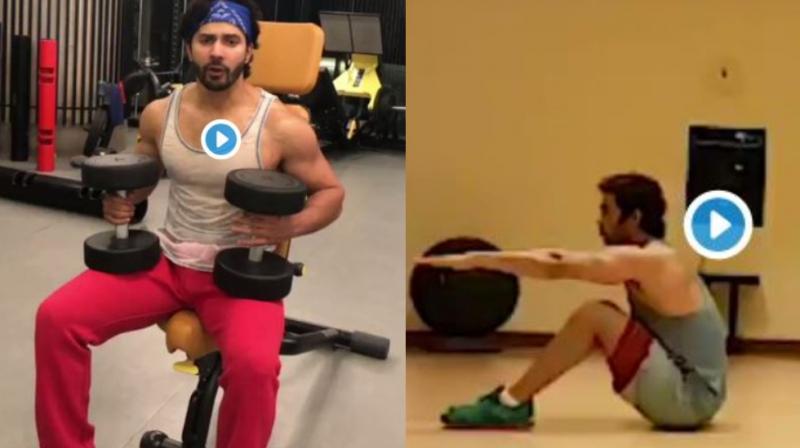 Mumbai: Union Minister of Youth Affairs and Sports Rajyavardhan Singh Rathore recently came up with an innovate initiative on Twitter where he narrated how Prime Minister Narendra Modi wanted the country to be fit.

Calling it the fitness challenge, Rajyavardhan himself shared a video to motivate India towards a healthier lifestyle. Following that video, many sports and Bollywood celebrities took up the challenge and now it has become a rage among many. Here are some who took it up:

I have accepted the #FitnessChallenge by @ra_THORe sir. Now I would like to challenge my wife @AnushkaSharma , our PM @narendramodi ji and @msdhoni Bhai for the same. 😀 #HumFitTohIndiaFit #ComeOutAndPlay pic.twitter.com/e9BAToE6bg

Another day, another #FitnessChallenge and this time for @shahidkapoor. Come on superstar show us how you do it. #HumFitTohIndiaFit @Ra_THORe pic.twitter.com/ZoaAxhXmBJ

In a rare case scenario, Amitabh Bachchan also came out in support of the initiative, but instead of a video, he posted a photo. See it here:

T 2816 - - @Ra_THORe we accept the challenge of #HumFitTohIndiaFit #FitnessChallenge .. main mantra : BE CONTINUOUSLY MOBILE .. get up for every errand yourself, gym each day, push away that excess morsel of temptation, drive or cycle yourself, see the Sun more often !🙏 pic.twitter.com/4SQ2jRiSuy

Following Anushka Sharma and Tiger Shroff’s footsteps, Varun Dhawan and Sushant Singh Rajput have turned out to be the latest ones to take up the challenge.

#HumFitToIndiaFit is what I’ve always believed in. Big thumbs up for this wonderful and timely initiative by @Ra_THORe Sir. And now I challenge @NITIAayog ‘s Vice Chairman @RajivKumar1 , CEO @amitabhk87 and the entire #NitiAayog ‘s Wonderful team pic.twitter.com/Zv7YXukFe1

Thank you @Ra_THORe Sir for starting his much needed fitness movement and inviting us to join and inspire and be inspired .. it doesn’t matter if you are pregnant ,you can still stay fit and healthy 😉I challenge @YUVSTRONG12 @priyankachopra and @juniorbachchan #HumFitToIndiaFit pic.twitter.com/2ArL71TEVk

Hrithik Roshan had also taken up the challenge, but it got backfired for his irresponsible behaviour. Meanwhile, many others, including Prime Minister Narendra Modi have promised to post their fitness videos, which are being looked forward to with bated breath.