Entertainment   Bollywood  27 May 2018  ‘Four girls doing a film together is empowering’
Entertainment, Bollywood

‘Four girls doing a film together is empowering’

The cast of Veere di Wedding opens up about cuss words, female bonding, and why they want to shrug off the ‘chick flick’ label. 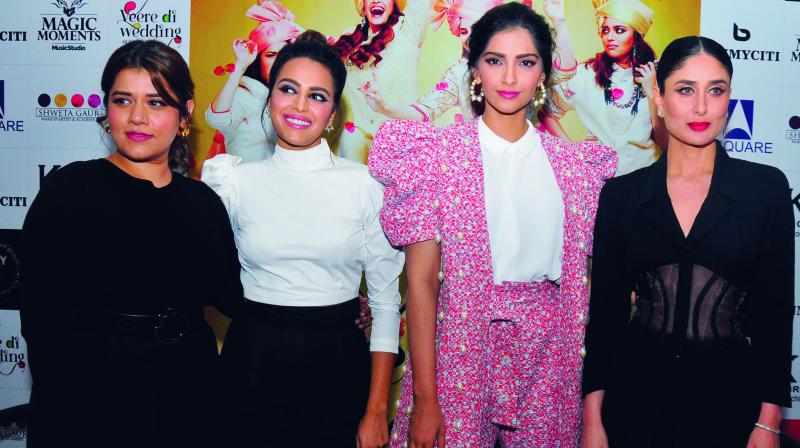 Kareena Kapoor Khan, Sonam Kapoor Ahuja, Swara Bhaskar and Shikha Talsania were recently in the capital to promote their upcoming film Veere Di Wedding, that is all set to release on June 1.

Kareena Kapoor Khan, Sonam Kapoor Ahuja, Swara Bhaskar and Shikha Talsania were recently in the capital to promote their upcoming film Veere Di Wedding, that is all set to release on June 1.

Kareena Kapoor Khan on being asked how she felt about doing the movie replied, “It was a great experience working with Sonam, Swara and Shikha. I got to explore a different kind of language and I hope my fans like it. I am used to working with male actors but this time we are a group of four girls and I am really waiting for the reaction from our fans. I want to see how they click with this kind of a movie as it is very different. We are definitely ready for this film and I am feeling positive.”

The film has been criticised for using a lot of cuss words, to which Sonam Kapoor Ahuja said, “Delhi girls and Mumbai girls talk like this colloquially and I did not think much of it. I didn’t know that men were going to react this way. When they use cuss words we don’t react like that. I thought it was a great script, great dialogues, and it will be very enjoyable doing this. Four girls doing a film together is empowering in itself. The subject is four women and their lives. The audience might relate to some of the characters and that is what the film is all about.”

When Shikha was asked about doing a bold role in the web series, Sonam took over and answered on her behalf, “I’m sorry Shikha, I’m taking over and I want to say that web series is a very free platform as one doesn’t have to go through stages of trying to get it screened. So it’s a completely different ball game.”

The film is being pegged as a chick flick and Swara Bhaskar doesn’t agree with that label. “I think basically chick flick is a weird category. Any story about women is being called a chick flick. Have we ever in the last 100 years said that this is a male-centric film or something like that? So if there is a story about women then why label it like this? This is a comedy, there is romance and a new genre has been made about women. So I think this is a movie for everyone, there is nothing very different to it. I feel everyone should come and watch it. For things like me doing a pole dance, you need a huge amount of fitness which I don’t feel I have, but yes, I have done many things in my films which I haven’t done in real life. For example, playing the role of a rich father’s spoilt daughter is a first. The pole dance was exciting and enjoyable, bed rest was advised to me later.”

Shikha Talsania was asked about what happens between girls behind closed doors and if it is fun, and she said, “You can expect that and much more. We are trying to tell a story that is very debatable. When I did a bold topic in web series no one said anything and it was critically well appreciated. But the same concept with four girls suddenly is being called female empowerment. This labelling doesn’t make sense,” she signs off.