Entertainment   Bollywood  27 May 2018  Despite ‘rift’, Deepika was invited for Sonam’s wedding, goofs up in video with Anil
Entertainment, Bollywood

Despite ‘rift’, Deepika was invited for Sonam’s wedding, goofs up in video with Anil

A video of Deepika with Sonam’s father Anil Kapoor is going viral, finally revealing that she was invited for the wedding. 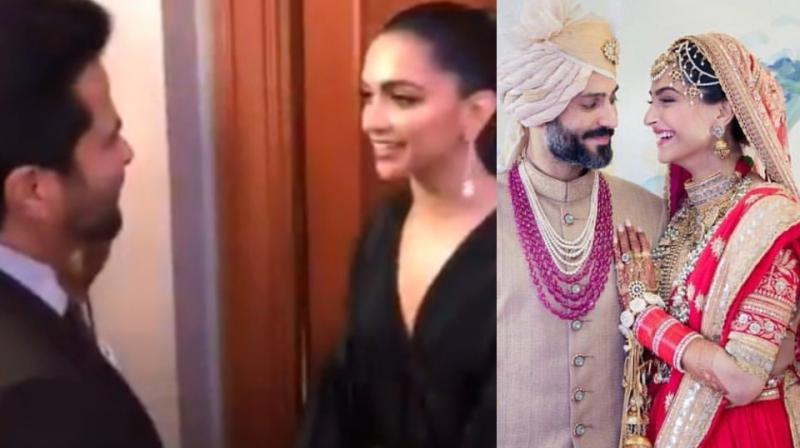 Mumbai: Reports of Sonam Kapoor personally inviting Aishwarya Rai Bachchan for her wedding despite their 'cold war' over the years had made headlines, and the latter did arrive for the reception with husband Abhishek Bachchan.

And it now seems another actress who has a history of rift with Sonam was also invited.

We are talking about Deepika Padukone.

Since the time the actresses made their respective debuts with ‘Saawariya’ and ‘Om Shanti Om’ on the same day in 2007, the two have been pitted against each other.

Despite their appearance together on ‘Koffee with Karan’ once or Sonam recently slamming a journalist when asked about their rift, the truth is that there is no love lost between the two.

Considering it is Sonam who has been reported to have taken digs at Deepika more often than vice versa over the years, it wouldn’t have been surprising if the latter was not invited for the wedding at all.

But since Sonam’s second cousin Ranveer Singh is dating Deepika, that would’ve been unlikely as well.

And now it’s finally been revealed that Deepika was indeed invited for the wedding, and we have a video proof of it.

So Deepika bumped into Sonam’s father Anil Kapoor, her ‘Race 2’ co-star, at a recent event for a leading fashion magazine, who said he ‘missed her’, presumably at the wedding.

The actress responded by saying, “I know… that’s why I am sorry. I was at Cannes.”

Deepika seems to have goofed up with her answer as she was not at Cannes but at Met Gala in USA at the time, with Sonam’s marriage taking place a few hours after the former’s appearance on the red carpet.

Considering the chock-a-block schedule at Met Gala followed by the one at Cannes, we don’t blame Deepika for the goof-up.