Alone in a hospital, Pakeezah actress breathes her last

According to the producer, the actress pined for her son Raja till her last breath. 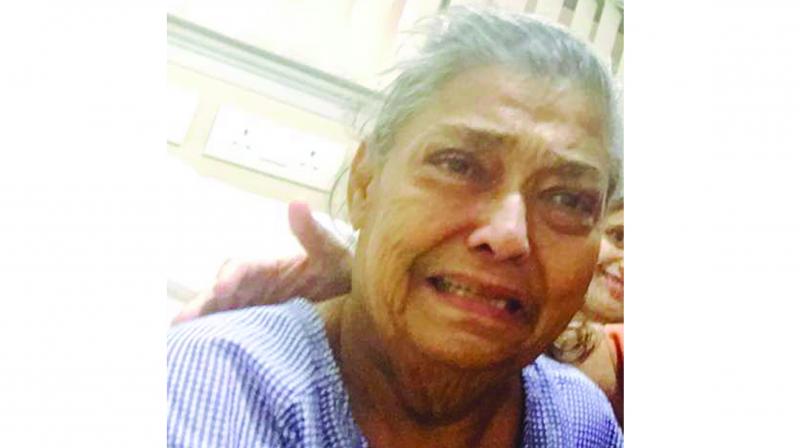 Geeta Kapoor in her later days

Veteran actress Geeta Kapoor, who passed away on Saturday morning at SRV Hospital in Mumbai, had made headlines around the same time a year ago when reports of her son Raja abandoning her at a hospital surfaced. Raja never returned, but the Pakeezah actress kept hoping that her he would come back for her, till she breathed her last.

Producer Ashoke Pandit, who took it upon himself to provide care for the actress, used to visit her often at the old age home she lived in. Ashoke tweeted about the news of the actress’ demise in which he said, “Standing besides the dead body of Actress #GeetaKapoor 57 who was abandoned by her kids in #SRVHospital a year back breathed her last at a suburban Old age home today morning. We tried our best to keep her healthy but her wait for her Son&daughter made her weaker day by day. #RIP (sic).”

The actress starred in over a 100 films and is best known for her role in Pakeezah, where she played Rajkumar’s second wife. Abandoned by her children, her wish to see them again remained unfulfilled as she bid adieu at the age of 57.

According to the producer, the actress pined for her son Raja till her last breath. “She used to remember her son often. She couldn’t even talk, but she would take her son’s name every day. She was confident her son would come to see her someday,” says Ashoke.

An official from the old age home, where she spent almost year, also said that the actress was in depression and wanted to see her son, whom she probably loved the most and trusted more than anyone. “She never had any visitors, barring one or two. She was depressed and stayed in bed. She waited for her son Raja till her last breath” he said.

Commenting on the search for Geeta’s children, Pandit says, “We have been trying to reach her children for the past one year. The police is trying to find out and we also are trying.”

The actress had reportedly stated that Raja used to beat her, and later got her admitted to SRV Hospital in Goregaon to which he never returned when the hospital bills started mounting. On account of the abuse, the actress was hospitalised for more than a month and was later moved to an old age home.

Talking about the actress’s strained relationship with her family, Subhash Khanvilkar, senior police inspector of Oshiwara police station says, “After a complaint was filed last year against Geeta Kapoor's son, Raja, for allegedly abandoning her and beating her on several occasions, nobody from the family came forward to claim responsibility.”

Ashoke, who was her only visitor, says he met her four days before her death. He says, “I had breakfast with her four days ago, she was fine then. Even then she told me her son Raja would definitely come to meet her. She couldn’t take the wait for her son.”

Her body will be kept at Cooper Hospital until Monday morning. “As per the law, we have to keep the body for two days. We have kept the body at Cooper Hospital hoping her children to come and atleast perform the last rites. We will wait for two days and by Monday, we will go ahead with the formalities. We will do our best to bid her a dignified good bye,” says Ashoke.