Madhuri has been inundated with film offers for sometime, but she has been picking her projects very carefully. 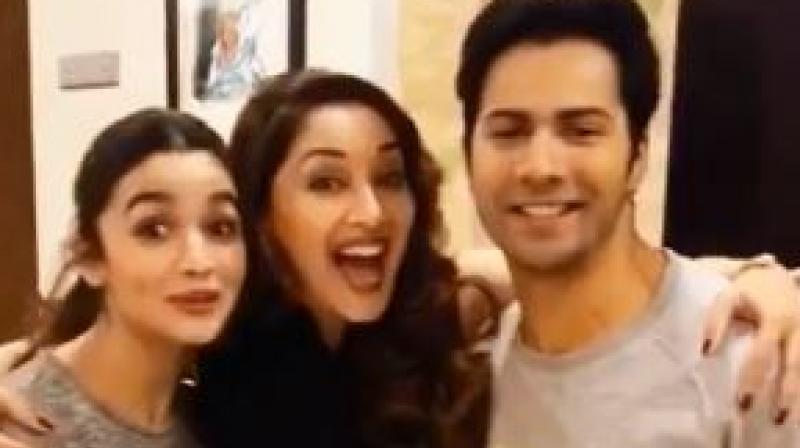 Madhuri has been inundated with offers for films for sometime now, but she has been picking her projects very carefully.

She has sprung into summer with multiple projects, and her fans are ecstatic.  With her first Marathi film debut in the bag, she's all set to promote the film, which releases May 25th. Meanwhile, she is currently, simultaneously shooting for Indra Kumar's ‘Total Dhamaal’ opposite Anil Kapoor and looking into her first production, 15th August (Marathi film).

Amidst all these projects, she'll start shooting for the much anticipated ‘Kalank’ today, where she'll be seen sharing screen space with Sanjay Dutt, Varun Dhawan, Sonakshi Sinha and Alia Bhatt.

Madhuri will be seen juggling 4 different projects simultaneously, which is not new for this veteran, who has earlier stated that she has shot for three different films in three shifts in one day. She most definitely is one of the busiest actresses in B town today and we can't wait to see her on the big screen again.

Taking about 'Kalank', Madhuri says, "I am excited to start the shoot for ‘Kalank’ today, it's my second association with Karan Johar after ‘Bucket list’ and it's been a lovely journey so far. Can't wait to begin this one."

Reportedly the shooting is for a special song with Alia Bhatt. A source told Filmfare, “Madhuri and Alia will be doing a special dance number in ‘Kalank’ together. It will be as exciting as Madhuri and Ranbir’s ‘Ghagra’ song in which the two starred together for the first time.”

The last time Madhuri danced with an actress was with Aishwarya Rai Bachchan in ‘Devdas’ for the song ‘Dola Re’.

Interestingly, Alia and Varun Dhawan danced on Madhuri Dixit's song 'Tamma Tamma' in their last release together, 'Badrinath Ki Dulhania'. The original song featured Sanjay Dutt with Madhuri, both of who are set to collaborate for 'Kalank'.