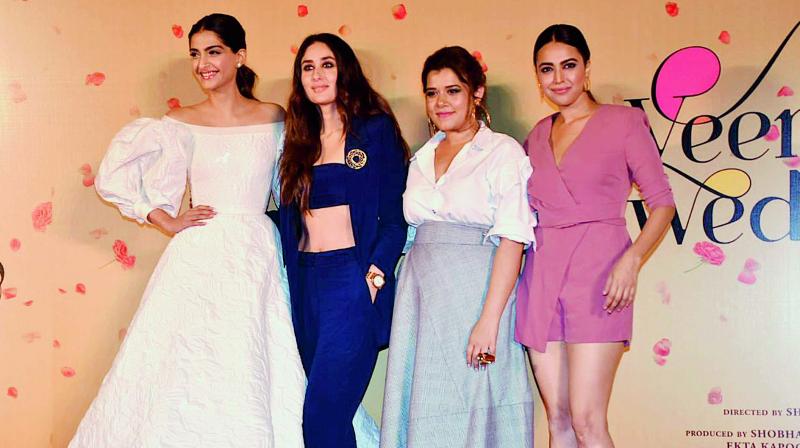 The four accomplished women of Veere Di Wedding – Sonam Kapoor, Kareena Kapoor, Swara Bhaskar and Shikha Talsania — seemed to share a close bond during the trailer launch of the film. And, this was not just a show of camaraderie for the cameras; their off-screen bonding was just as great.

Sonam shuts up anyone casting the slightest doubt on their friendship. “I am telling you, it is the easiest thing to work with other women. Unfortunately, our conditioning is such that people expect women to pull each other down and compete with each other,” she says.

She adds, “But, what’s amazing is to actually work towards the same goal and create the best possible version of something. If all girls come together they can literally move the world.”

Veere Di Wedding is a story about four girlfriends and their journey and is directed by Shashanka Ghosh. Unfortunately, Bollywood has never been keen on making an all-girls film as many feel they would not recover the money.

Sonam says, “It is a story about friendship, about girls. I don’t think such a film has been made before. It is entertaining, it is fun and has got romance, dance and drama. It has got everything. Why can’t women headline a commercial film?”

“Hopefully, with everyone’s support, this will bring about a change in the kind of films that are made and the kind of roles written for us,” she says.