Watch: Kriti gets 'envious' of Deepika, stops Sushant from watching her song

The actress doesn’t even allow to him to watch the full song as he tries hard to catch a glimpse of Deepika. 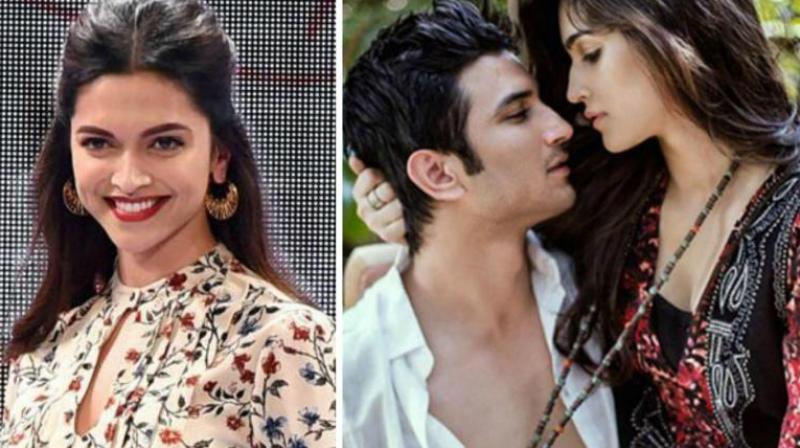 Mumbai: Substantial buzz has been building around the film 'Raabta' due to the real-life and reel-life chemistry of the lead actors Sushant Singh Rajput and Kriti Sanon, its trailer and the catchy first track.

However, there is a surprise in store for the fans, in the form of Deepika Padukone’s special song in the film.

The makers unveiled a teaser of the song on Twitter on Wednesday and the song already seems set to be a chartbuster.

The title song is a recreation of the popular song of the same name from the Saif Ali Khan-Kareena Kapoor Khan starrer ‘Agent Vinod’ and is composed by Pritam.

Even the leads Sushant and Kriti are extremely excited for Deepika’s track and in a video, we see the rumoured couple checking the song out.

Kriti wonders how someone could look so hot and even gets envious of her seeing Sushant's reaction to the song and doesn’t even allow to him to watch the full song.

#ShivAndSaira look totally mesmerized with something that they are watching! Can you guess what it could be? . @sushantsinghrajput @kritisanon @maddockfilmsofficial @tseries.official

Stay tuned for the full song which will be out later today.