Veteran actor Vinod Khanna, who was battling cancer, took his last breath this afternoon at 11.20am. 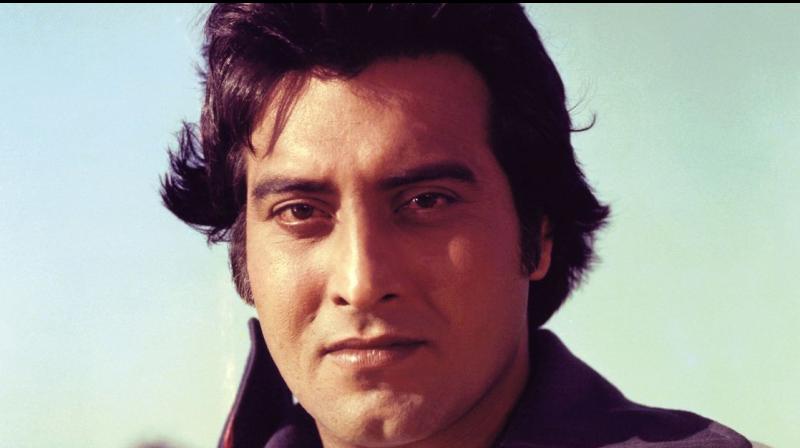 Mumbai: Veteran actor Vinod Khanna, who was battling cancer, took his last breath this afternoon at 11.20am, at Sir H.N. Reliance Foundation Hospital. He was admitted to the hospital earlier this month.

His co-actors and celebrities reacted on Twitter mourning their grief over his death.

Rajinikanth took the medium of Twitter to grieve over the actor’s demise. He wrote, “My dear friend Vinod Khanna… will miss you, RIP. My heartfelt condolences to the family. (sic)”

Actor Rishi Kapoor, who has worked in films like Amar Akbar Anthony with Vinod Khanna, shared a picture of the film’s poster and tweeted, “Will miss you Amar R.I.P. (sic)” 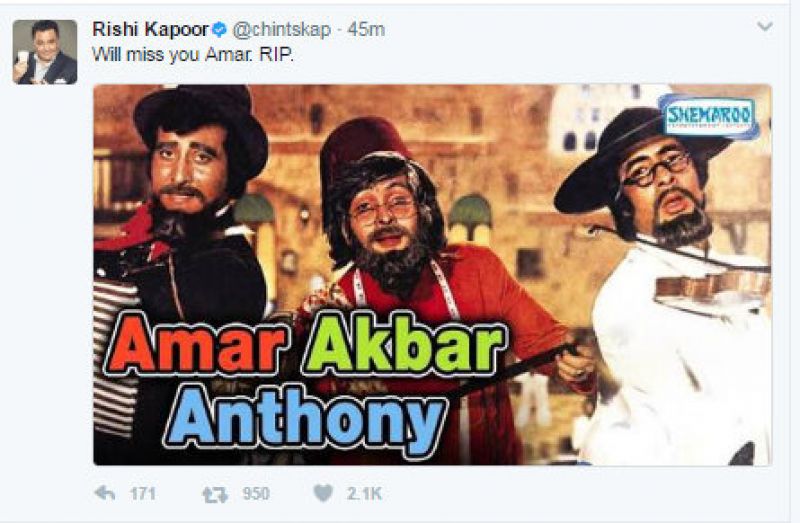 An emotional Rishi changed his display picture on Twitter with Vinod Khanna's picture and further tweeted: 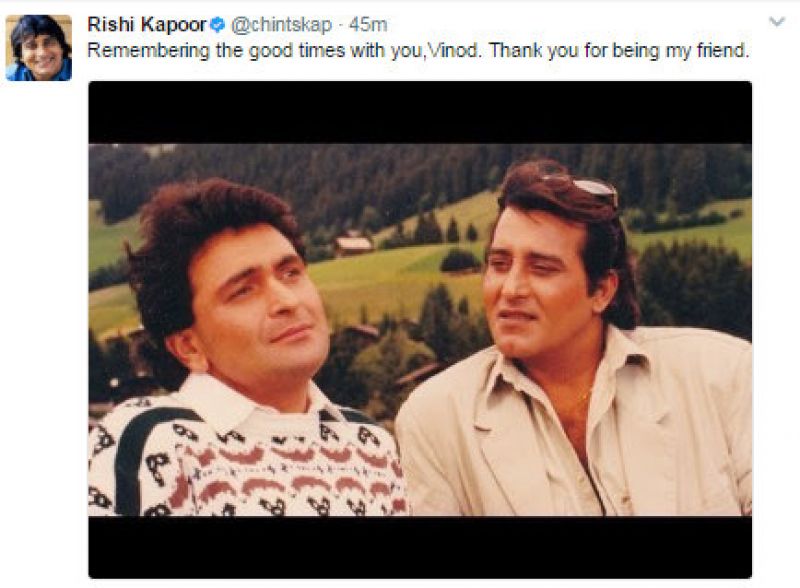 Amitabh Bachchan who was also a part of the same film, left his promotional interview of ‘Sarkar 3’ mid-way, as soon as he learned the news of the veteran’s death.

Vinod ji’s ‘Mere Apne’ co-actor Shatrughan Sinha posted the news of former’s death on Twitter. He tweeted, “Vinod Khanna, truly ‘Mere Apne’, one of my most admired and loved personalities, the supremely handsome & talented superstar is no more.. (sic)”

Filmmaker Subhash Ghai shared his last meeting with the lovable actor and said, “I met him last year at convocation of whistling woods film school when he was honoured with a maestro award by students for his outstanding contribution. A real handsome man on and off screen both. Celebrated his life with love n dignity n compassion for others n in service to his nation as mp. He will always live in my heart n mind. Good bye vinod RiP. (sic)”

Anupam Kher also expressed his grief. He said that he will miss the actor's larger than life performances. 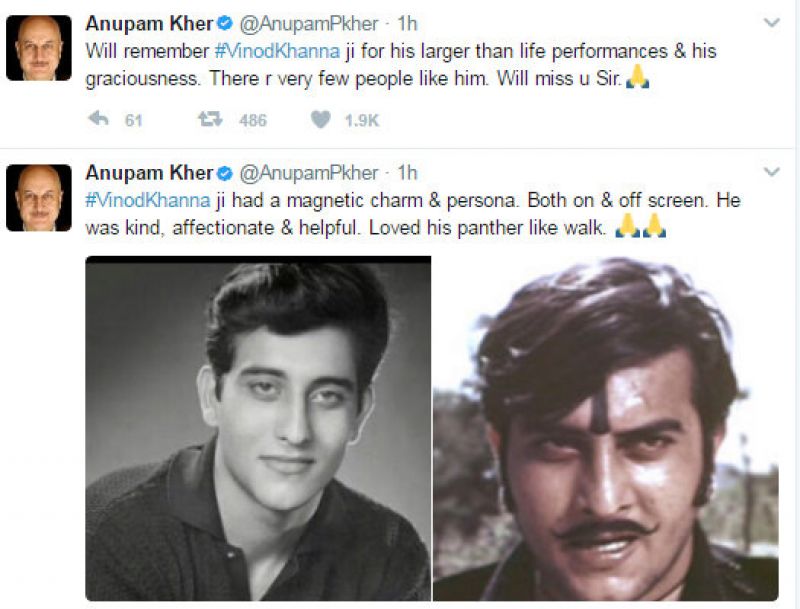 Hema Malini, who has worked in many films with Vinod Khanna, and has an unreleased film 'Ek Thi Rani Aisi Bhi' with him, too expressed her grief.

Noting Vinod Khanna as the best actor of his era, and considering it as a huge loss to the film industry, Lata Mangeshkar tweeted:

Filmmaker Mahesh Bhatt, who worked as a production manager in Vinod Khanna's 'Mera Gaon Mera Desh', is deeply saddened by this news and shared a throwback picture. 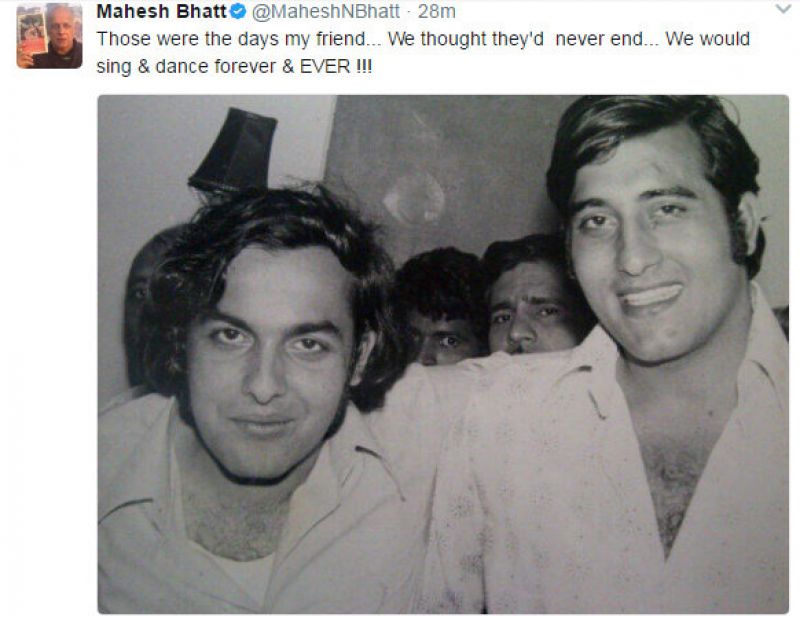 Mukesh Bhatt, who was very close to the actor revealed to a daily, "He was suffering from cancer for the past couple of years. He seemed to have recovered at one point, but then he suffered a relapse. The last time I met him was about six months back."

Anil Kapoor shared a picture of the late actor with his sons and passed his condolences to the family. 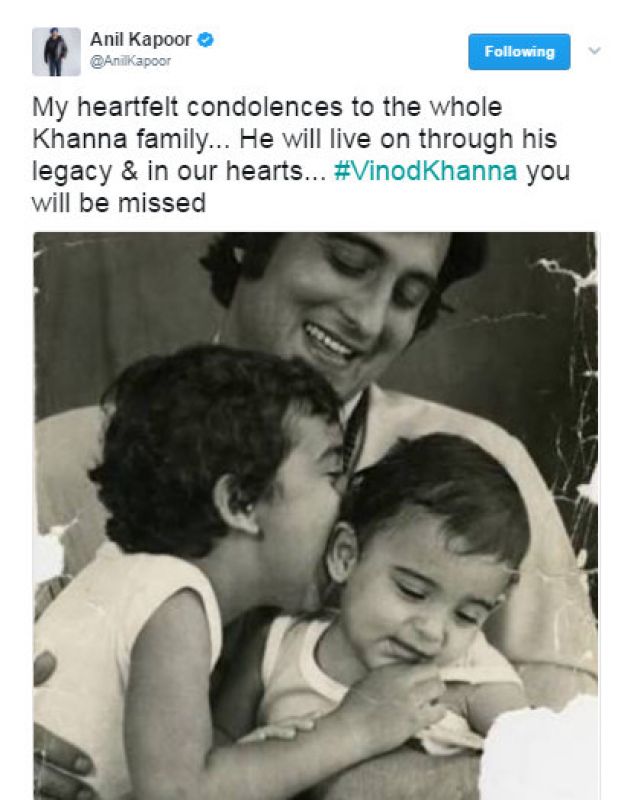 Taken aback by this news, Sanjay Dutt said, "It is saddening to hear of the demise of Vinod Khanna ji. I have watched him as a child and throughout my life was always fascinated by his style and charisma. He was always a thorough gentleman. A big loss to the fraternity. He is and always will be family to the Dutts. May his soul rest in peace. My deepest condolences to Kavita Bhabhi, Akshay, Rahul and Sakshi." 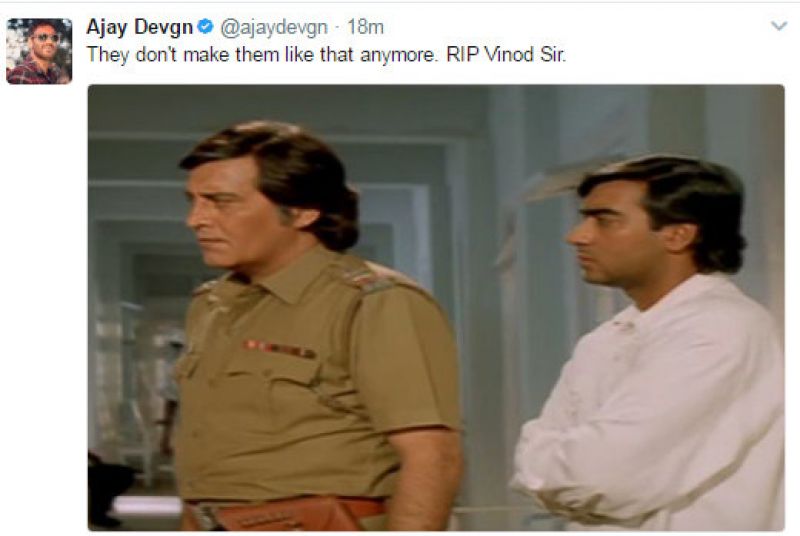 Irrfan Khan and Riteish Deshmukh shared a picture of the legend and expressed their sadness. 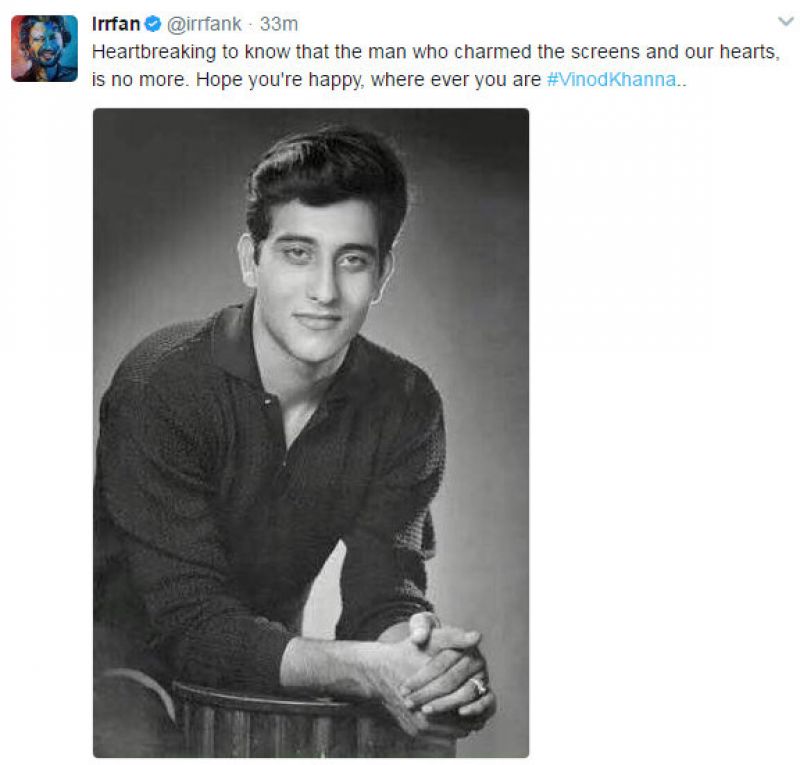 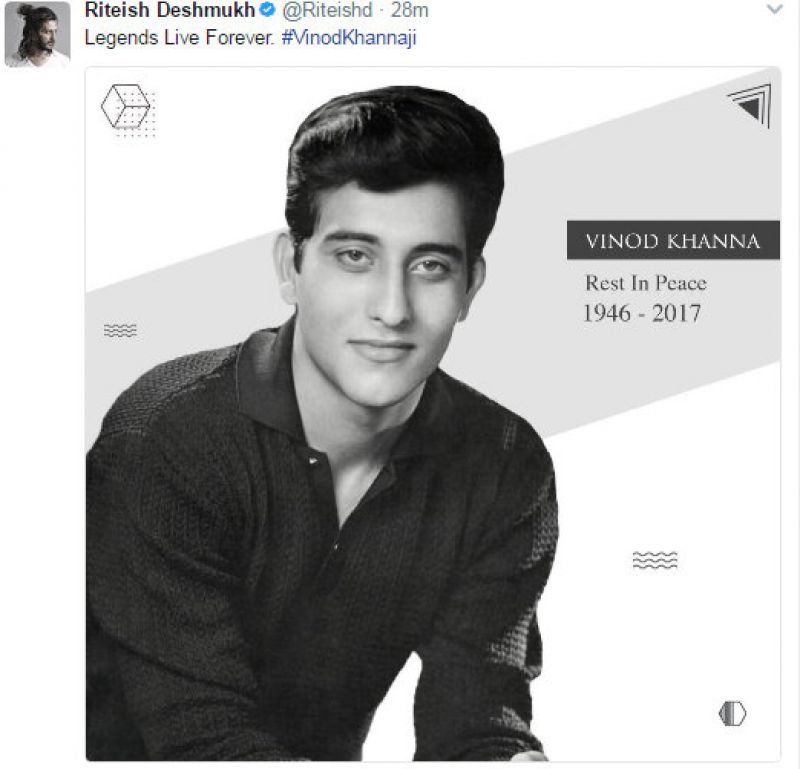 Saddened by the news, Sidharth Malhotra and Bhumi Pednekar also tweeted about it.

Vivek Oberoi passed his condolences to the late actor’s family and wrote, “An icon passes on but his legend remains in r hearts & minds! RIP #VinodKhanna ji u will be missed, Heartfelt Condolences @R_Khanna & Akshay! (sic)”