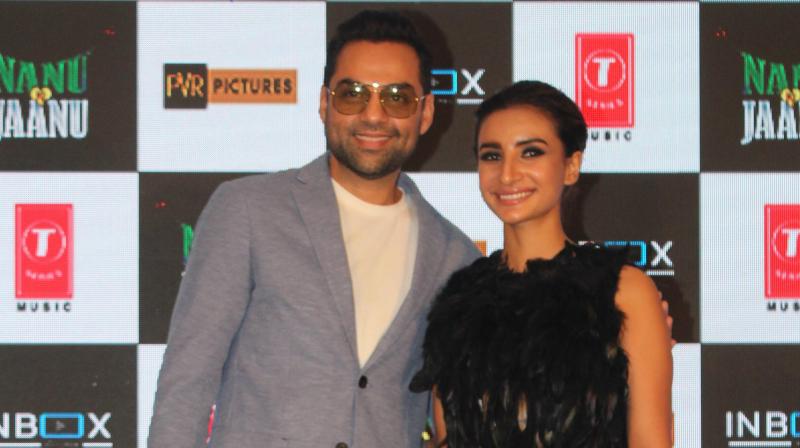 Abhay Deol and Patralekhaa at the trailer launch.

Mumbai: Abhay Deol and Patralekhaa are coming back to a Bollywood movie after a long gap.

The movie that brings them both together again happens to be a horror-comedy 'Nanu Ki Jaanu'".

The trailer of this movie, which takes you through a ride of emotions, was unveiled in the Suburbs on Monday.

When it comes to horror-comedy, the most fresh film in people's minds happens to be 'Golmaal Again'. Ask Faraz about possible comparisons, he says, "'Golmaal Again' is slapstick comedy, mine is realistic. So there should be no comparisons."

While Abhay Deol says he signed the movie because he loved the script and many other things, Patra gave a simple answer saying, "I thought the film is a very sweet one."

She was also praises for Abhay as she also declared, "Abhay was a big inspiration for me to choose my career so I obviously jumped into doing the film with him. He's punctual, dedicated and vocal."

Ask Abhay if he felt any supernatural power and he responds, "I've never had supernatural instances. Actually I don't believe in ghosts, but spirits."

He further confirmed his cameo in Shah Rukh Khan, Katrina Kaif and Anushka Sharma starrer 'Zero' saying, "I have a cameo in 'Zero' and that's all I can tell you."

Abhay is reportedly playing Katrina's husband in the movie, and coming to their pairing, Abhay was asked about 'Zindagi Na Milegi Dobara's sequel, to which also he responded, "We're all ready for 'ZNMD 2' but Zoya has to have the mood."

Patralekhaa was in the news since a while because she happens to be successful actor Rajkummar Rao's girlfriend.

Ask the actress about the couple discussing work or taking advice and she answers, "Me and Raj don't interfere in each other's work."