The three actors chose the most indirect ways to convey their disapproval, while the others didn't hold back. 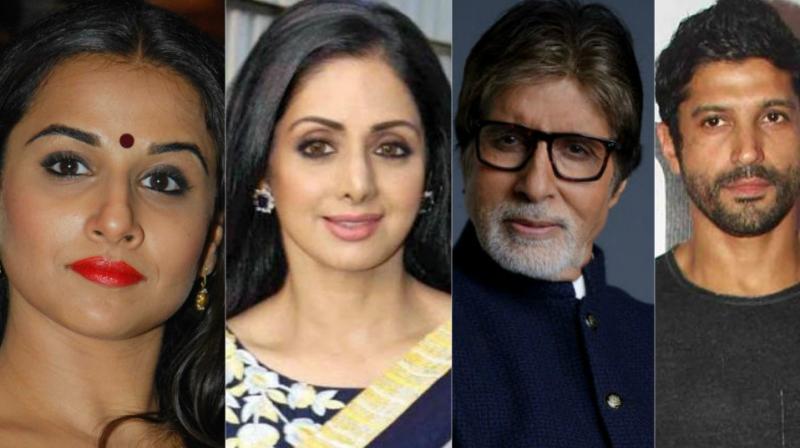 Vidya Balan, Amitabh Bachchan and Farhan Akhtar hinted at their disapporval of the reporting of Sridevi's death.

Mumbai: One of the biggest stars of the country, Sridevi is no more and her death in Dubai on Saturday has sent shockwaves across the country.

But the coverage of the actress’ death has ruffled feathers in the film industry.

Rishi Kapoor’s rant at the media for calling ‘Sridevi’ a mere ‘body’ might have been arguable, but the reportage attained new lows after it was revealed on Monday that she accidentally drowned in the bathtub.

Be it stressing on alleged cosmetic surgeries, consumption of alcohol or analysing bathrooms and bathtubs, news channels went on an overdrive which didn’t please the Bollywood stars at all.

But unlike Rishi Kapoor's heated reaction, Vidya Balan, Farhan Akhtar and Amitabh Bachchan used the fewest words to supposedly express their views against the media.

Vidya, who had shared that her inspiration was no more without even mentioning Sridevi or tweeting her picture when she passed, took to Twitter to share a poster of ‘Sadma’ and only wrote, ‘May they let you rest in peace.’

May they let you rest in peace.... pic.twitter.com/stoWljWkbf

Like Vidya, Amitabh Bachchan asked to leave the negativity for love, tweeting ‘Get back to love. It is only sustainable.’

Farhan also seemed to hint at the lowering standards of journalism by writing ‘There’s no bottom in the barrel of the graceless.’

There’s no bottom in the barrel of the graceless.

Hema Malini also conveyed her irritation in a gentle way but her concern seemed to refer to journalists approaching her for quotes and bytes.

The whole film industry is trying to come to terms with this tragedy. We have lost a wonderful member whose life has been dedicated to the entertainment field for so many decades. It is only right that we be allowed to grieve in peace.

These same channels used to run just to get a glimpse or a small byte from her.. n now they come up with such reporting! Better retire guys🙏🏽 U can’t go more disgraceful 🙏🏽 ur reporting is the biggest SADMA to ur viewers. #gorestinpeace

Random ppl sitting in newsrooms discussing her death, her personality, her life etc.. ppl who haven’t even known her personally !!! Isn’t that preposterous ?!

Do yourselves & your family a favour .. put that TV off,I am amazed that news channels are stooping to this level & ppl think it’s ok to come on a panel & discuss this!there are two very young girls who lost their mom,pls pls stop this

Several hundred years later history books will mark these years for the death of journalism.

Dont know which is a bigger tragerdy. #sridevi passing away or the mad feeding frenzy of it by the media.. heart goes out to boney sahab i hope hes ok 🙏

Sridevi’s family has been given the clearance by the Dubai Police to bring her mortal remains home.

The family is expected to reach at 11.30 pm on Tuesday, and the funeral will then be held on Wednesday.