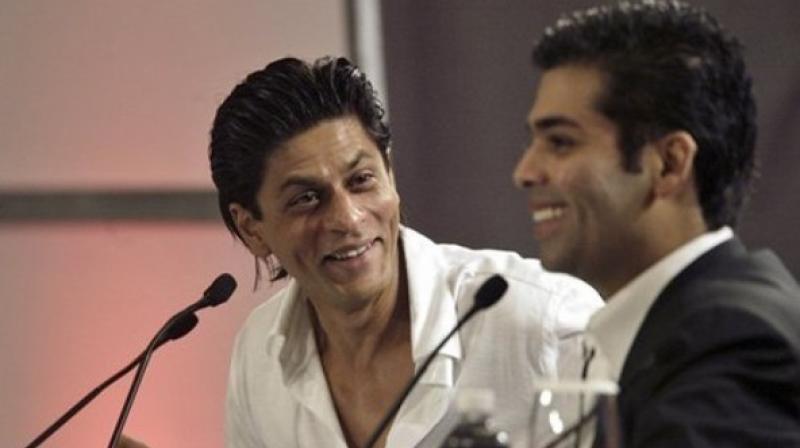 Shah Rukh and Karan had recently collaborated on the film 'Dear Zindagi'.

Mumbai: Celebrities often promote each other's films on social media by sharing teasers, pictures and even praising films after the release. And when it is close friends, Karan Johar and Shah Rukh Khan, you can expect that often.

So when Shah Rukh’s upcoming film just released and opened to a thunderous response at the box office, with the actor’s performance also being lauded, it is unlikely that Karan won’t praise the film. The filmmaker thus took to Twitter to dub ‘Raaes’ as a ‘Full on paisa vasool SUPERHIT!!’ and lauded the ‘smouldering’ Shah Rukh for ‘nailing the part to perfection.’

The tweet led to a hilarious exchange between them with Shah Rukh impressing with the wittiest wordplay of film names.

Shah Rukh responded to the tweet by saying that even Karan should make an action film, ‘Dishoom Dishoom Hota Hai'. The filmmaker promises to make one if the superstar ghost directs it, something Shah Rukh claims to have already done by ‘running furiously after the ladies’ in his films.

Karan then reveals that Shah Rukh had directed the basketball scenes in ‘Kuch Kuch Hota Hain’, which prompts the actor to push him for a sports film, ‘Ae Dangal Hai Mushkil Yahaan'.

Karan acts uncomfortable with the number of choices saying that versatility was not his strength, which Shah Rukh disapproves by hilariously saying the filmmaker was so versatile that his last three films’ name didn’t start with a ‘K’.

Check out the conversation here:

There is no doubt that Shah Rukh’s wit is also responsible for his massive fan base.