Book “281 and Beyond” which V.V.S. Laxman has co-authored with R. Kaushik. 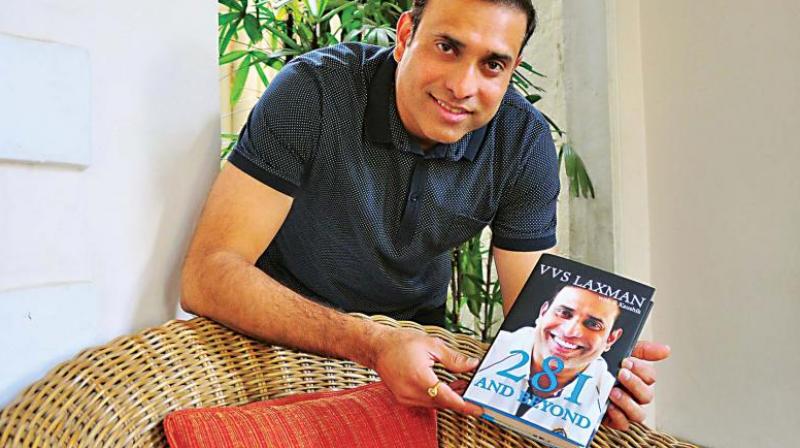 Indian cricket has many legends and Vangipurapu Venkata Sai Laxman, or VVS Laxman, as he is more popularly called, easily finds a place among them. His famous knock of 281 at the Eden Gardens Test match made history and it is this landmark game that forms the title of his biography, “281 and Beyond” that released last month. Fans of the now retired player get a glimpse of his life, dreams and relationships, all of which have made him the man he is, reports Ram Teja and Sumit Singh.

Indian cricket has been marked by many milestones, but there is one that stands out in particular, the famous Eden Garden test of 2001 between India and Australia. At the heart of the match was V.V.S. Laxman’s knock of 281, which has been described as the catalyst that changed the way India played the game in the years afterwards.

Earlier, Australia’s Steve Waugh had  vanquished the Indians in Mumbai and was on the verge of conquering the “final frontier”  with the team looking for a record 17 consecutive test wins. The situation looked grim for India in the second test too as the team folded for 175 in the first innings. It was then that Laxman went on to play one of the finest innings of his career and not unexpectedly, it is with this that he introduces us to his book  “281 and Beyond”  which he has co-authored with R. Kaushik.

A part of the famous “Fab Four” of Indian cricket, consisting of Sachin Tendulkar, Rahul Dravid and Sourav Ganguly, who formed the bedrock of the team, Laxman was the last entrant into this quartet and perhaps the likeliest one to take the fall if the team failed, in his view.

Laxman dwells on his childhood in the 1970s in a family that prioritized education over any other career. His father being a doctor, it was  presumed  he would follow suit and study medicine. But he had other ideas and his uncle, who encouraged him to play cricket, enrolled him in a nearby academy. As Laxman made his mark in the under age-group cricket,  he realised that the sport was his calling and he would soon give it his all. Former India captain, Azharrudin was already a popular player in the Hyderabad circuit and  Laxman’s idol.

Finding fault with the fact that Hyderabad cricket was misconstrued as “lazy and laidback”  in the domestic circuit in the 1990s, he recalls his determination to erase that image and make the Hyderabad team on par with the elite teams of Mumbai, Karnataka, and Bengal.

He also talks of his anguish at missing out on the Ranji trophy in the 1999-2000 season, where he amassed 1,415 runs at an average of 108 in nine matches,  notching up eight hundreds.  Hyderabad went on to lose to Mumbai in the final and Laxman found no solace in being the top run-getter without the Ranji trophy, although he set a record that is till today the benchmark for any domestic cricketer. His account takes you back to times when Hyderabad was actually a force to reckon with and not the pale shadow of its former self that it has become today. Laxman recollects that he even pondered quitting the game when he failed to make it to the team for the 2003 World Cup in South Africa. Although the disappointment left a deep impact on him , he soon managed to overcome that dull period and go on to have a purple patch in the one-day format in the triangular ODI series that followed against Australia and Zimbabwe Down Under.

His relationship with most of his coaches has been well documented in the book and there is nothing that catches an ardent follower of the game off guard. John Wright, who was the coach from 2001 and oversaw the integration of Laxman into the team, is spoken of with high regard and so is Gary Kirsten, well known for his man-management skills. The bond the team shared with Kirsten was evident in Cape Town in 2011, when he invited all the players to his home for dinner. When Gary announced that the 2011 World Cup would be his last assignment with the Indian team, all the players pleaded with his wife to allow him to stay on,  indicating their great appreciation for him.

Laxman’s tumultuous relationship with Greg Chappel, however, has a similar ring to the one Sourav Ganguly shared with the Aussie.  While complaining about his lack of man-management skills and his way of functioning,  Laxman offers objective criticism,  saying he had the utmost respect for Greg the batsman, but not the coach. “He was brusque and abrasive, highly opinionated and rigid in his thinking. His man-management skills were non-existent. He quickly sowed further seeds of discontent in an already diffident team,” he recalls.

His admiration for his teammates stands out as he dedicates a separate chapter to them,  describing the camaraderie he shared with his contemporaries, Tendulkar, Dravid, Kumble and Ganguly.

The decision to retire was apparently made with no second thoughts although he could have gone out after making one last appearance in his home ground of Hyderabad after the disastrous tour of Australia in 2011-12.

Laxman signs off speaking of his dream to manage a school for underprivileged children,  indicating he has already moved on to the next innings of his life.

It was an evening of nostalgia and much back thumping as one of the greats of Indian cricket, V.V.S. Laxman released his autobiography, 281 and Beyond, in the city on Thursday in the company of other greats,  Rahul Dravid, Anil Kumble and Javagal Srinath.

In the audience too were legends like Gundappa Vishwanath, Roger Binny, Syed Kirmani and Dodda Ganesh. Former Karnataka batsman and local boy, Robin Uthappa was also present with his wife, Sheetal.

Noted journalist from Bengaluru, R Kaushik, who has co-authored the book, wasn’t present at the event because he was in Australia reporting on the ongoing India-Australia series.

Said Laxman about the book, “281 is a very satisfying number although a lot of people feel that I should see it as my unlucky number because I got out on it.  281 and Beyond is about what took place after that experience in my career and before, which includes my childhood and early days of playing cricket. It’s important for  parents to identify the unique talent of their children. If you encourage that, the sky is the limit and nothing is impossible. In the family background that I came from no one would have dreamt, including I, that I would be playing for India one day.”

Recalling the  momentous day at Eden Gardens when he partnered with Rahul Dravid, Laxman added, “It was kind of living in the present because we were 274 runs behind and we didn’t have the chance to think about what had happened or what was going to happen. The reality was it was a terrible situation for us to be in. So we broke it down into small goals. As individuals, we wanted to play each and every ball to its merit and at the end of each over we would encourage each other to play the best we could in the next.”

Commenting on Laxman’s fascinating journey,  Dravid recalled, “Laxman already had a reputation when he came to play for the under -19. For me it was an incredible experience to watch him bat. He was known to be the next big thing from Hyderabad after Azharuddin. To have someone like Laxman, who is so disciplined in our team,  challenged me to up my game.”

Kumble admitted he had missed watching the Kolkata 281 match. “But I was fortunate to watch the Adelaide test, where they scored 300 and I also probably had a great feeling that we were going to win the test match at that point in time,” he smiled.