The headlines that shook Bollywood

From Padmaavat’s tryst with Karni Sena to high profile men’s falling from grace, here’s what rocked the film industry this year. 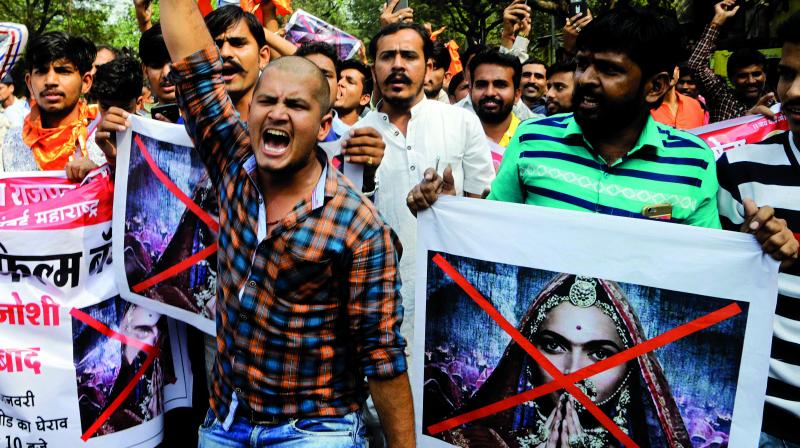 They threatened to cut off Deepika Padukone’s nose if the film was released.

The Me Too Movement:
From Subhash Ghai to Subhash Kapoor, they fell from grace faster than rose petals from a windswept garden.  Harassment-accused Sajid Khan lost his directorial post in the House Full 4 project while Nana Patekar was shown the door. Sanskari Alok Nath was accused of rape while director Vikas Bahl is still trying to figure out the losses.

Malaika Arora-Arjun  Kapoor:
For years,  there were whispers of their relationship. But now after her divorce, Malaika Arora (sans Khan) has thrown all caution to the wind and is out in the open with the new guy in her life who is 10 years her junior.

The Big C:
When Irrfan announced his illness, we were shocked. But our shock turned to disbelief as several other Bollywood names fell prey to the dreaded disease. Let’s hope 2019 brings the healing touch to Bollywood.

Padmaavat and Karni Seva:
They threatened to cut off Deepika Padukone’s nose if the film was released. School buses were attacked, and effigies were burnt. Though a nationwide ban on the film was demanded, Padmaavat released across India barring a few states and went on to become one of the highest-grossing films of 2018.

Sridevi’s demise:
The diva’s death in Dubai still remains a puzzle. Having a career which expanded for over four decades, Bollywood’s veteran actress passed away at the age of 54. In an industry dominated mostly by male superstars, Sridevi’s screen presence and sheer acting prowess were guarantee enough for the success of her films.

Naseeruddin Shah’s Ticket To Pakistan:
The minute this peerless actor expressed his insecurities and fears about the future of his children, a zealous politician offered him a one-way ticket to Karachi. As of now, Naseer is not planning to take up the generous offer. There is much-unfinished business to look into at home.

Arjun Rampal-Mehr Jessia Part ways:
They were together as for almost two decades. “After a 20-year-long beautiful journey filled with love and beautiful memories, we would like to share, that all journeys have different paths. We feel that it is time for us to move on to different destinations henceforth,” read their joint statement. Apparently, Arjun is now dating Serbian model Natasa  Stankovic.

Priyanka Chopra Snubs Salman Khan:
Who would dare to walk out on a Salman starrer, and that too after persuading him for the role?  We still don’t know why and how Priyanka got herself into this uncomfortable situation when she turned her back on Salman’s ambitious film Bharat. But to take on Salman head-on requires nerves of steel. Our desi girl proved she has what it takes.

Zeenat Aman Erased:
Yesteryear’s hit star and the man who played the tyrannical Tipu Sultan on television, Sanjay Khan came out with his memoirs where he conveniently forgot to mention the sordid episode from the past where  Zeenat Aman, in a long-term relationship with the Khan, was thrashed in public. Zeenat lost a part of eyesight during the beating. But it seems it is Sanjay Khan who can’t see.