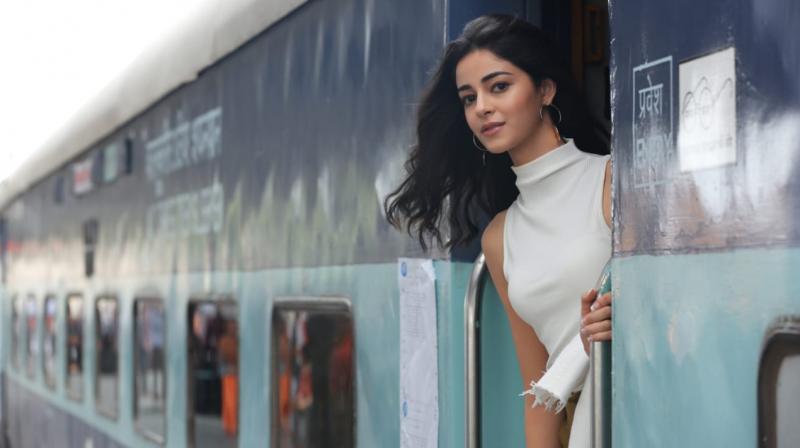 Mumbai: Well after the stupendous success of her debut venture 'Student Of The Year 2', Ananya Panday will be seen in producers Bhushan Kumar and Juno Chopra’s upcoming movie 'Pati Patni Aur Woh'. The trailer of which was released recently.

Ananya Panday has been receiving a lot of appreciation for her look in the film. It is said that the scene was Ananya’s first shot in the film and director Mudassar Aziz wanted her first shot to create an impact on the audience. Director Mudassir Aziz told Ananya to refer to Shah Rukh Khan’s shot from 'Main Hoon Na' (2004) when he alights from a train. Mudassar wanted Ananya to create the same impact as Shah Rukh Khan had done in the film.

Ananya obviously was so thrilled with the reference that she actually shot for the scene without any fear. The hitch was that director Mudassar was planning to shoot the scene on an actual location of a crowded railway station hence he made sure that it was perfect.

Director Mudassar Aziz has shot the scene on the actual Kanpur Central station amidst the real crowd and Ananya was so confident that was not disturbed by the real crowd on the station. She looks so poised despite the fact that it’s just her second film.

Ananya says, “Director Mudassir Aziz asked me to watch Shah Rukh Khan’s Main Hoon Na where Shah Rukh Khan alights from the train as he wanted the same impact in the scene. I was so thrilled because I have always been a great fan of Shah Rukh Sir and always admired him. There was no better reference than Shah Rukh when it comes to such scenes. He makes every scene so realistic. I wanted to bring the same effect on-screen and I have tried my best.”

Directed by Mudassar Aziz and produced by Bhushan Kumar of T-series and Juno Chopra of BR Studios. 'Pati Patni Aur Woh' is poised to release on December 6, 2019.