Kunal Kemmu to play Ram Jethmalani in biopic, produce film along with Soha

The 'Golmaal Again' actor says bringing the journey of the prolific lawyer-politician is a massive responsibility on the team. 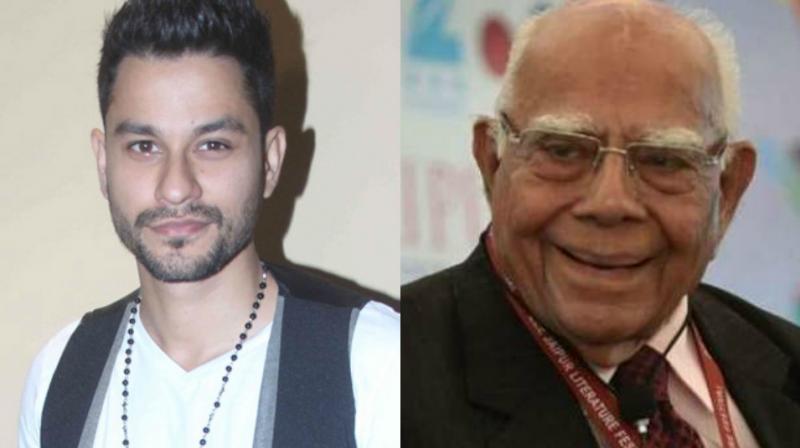 Soha Ali Khan and Kunal Kemmu's biopic on Ram Jethmalani will be their first production.

Mumbai: Kunal Kemmu, who will play Ram Jethmalani on the big screen, says bringing the journey of the prolific lawyer-politician is a massive responsibility on the team.

The film will be produced by Kunal, his wife Soha Ali Khan and Ronnie Screwvala.

He says they were initially unsure about bringing Jethmalani's story to life, but they firmly believed that it deserves a cinematic adaptation.

In an interview with PTI, Kunal says, "I felt we need to tell his story as he has a 70-year-old career and a 94-year-old life, it is so amazing. We read all the books on him. We did not have a plan, we just felt this story needs to be told whether as a series or a feature film.

"There is lot of responsibility, as it is not a work of fiction, you do fictionalise few things, but primarily it is a biopic. A lot of research goes into a project like this."

The 34-year-old actor says getting Jethmalani's official go-ahead for the biopic was most important for the team.

"We needed his life rights with us, and it all happened (referring to Jethmalani giving his nod for the film), now it is a huge responsibility on us."

Kunal met Jethmalani, along with Soha, when he was 93.

"We were in Delhi, and I have a lot of friends who are into law. Every time there are some legal discussions, Ram Jethmalani's case studies are talked about.

"I was intrigued by him, his journey. He is supposed to be the God in the world of law. He has an amazing professional life and an intriguing personal life," says Kunal.

The 'Golmaal Again' actor says the film will have a balanced approach towards all aspects of Jethmalani's life, be it good or bad.

"The biopic has to be real. You get the life rights as you want to say everything that is not in public domain. It will be all of it (positive and negative)."

When asked if the film will be a case-by-case account, the actor says, "Those things are being worked out."

Kunal adds the team is putting the script together and they will soon have a director onboard.

He says they have zeroed down on a title for the biopic, but it is too early to reveal anything at the moment.

The film will go on floors next year.