Taapsee Pannu has been busy promoting Judwaa 2 with her co-star. 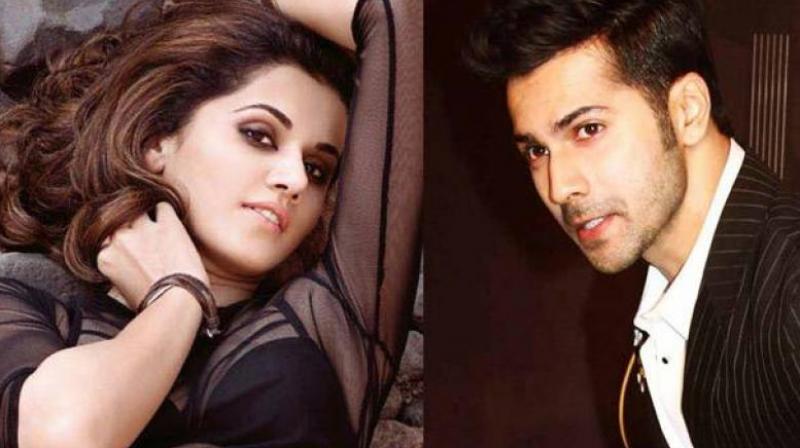 Known for her unconventional films, Taapsee Pannu has stepped out of her comfort zone with Judwaa 2. She grabbed all the limelight with her designed swimsuit.

Soon after, she was compared to Deepika Padukone’s similar bikini look. However, the Pink actress has no qualms about the comparison. She says, “I am happy people are comparing me to Deepika. I take it as a compliment!” she says.

Taapsee is quick to clarify that she isn’t playing the police. “We have different bodies. I am not saying either of us have done outdone each other. I am proud that I haven’t managed to look bad. It was a huge achievement for me because this was the first time I was wearing a bikini,” she explains.

The actress didn’t have any apprehensions about donning a bikini. She says, “It was not like I was against wearing a bikini. I was worried if I can carry it off. That was my only stress while I was working for the film.”

Unfortunately, she was even trolled for her bikini pictures, which Tapsee didn’t take it flatly. She says, “I never reply to trolls. Whatever you say, will get trolled. My response was completely unintentional. I was in a happy mood and I had a funny answer to it so I posted it.”

Strangely enough, we didn’t hear of catfights between the lead actresses Jacqueline Fernandez and Tapsee. She says, “We didn’t have much to shoot together. We hardly had two scenes!” she explains, adding, “I don’t think she has any reason to fear me or vice versa. There was no way we could eat into each other’s roles.”

She is all praise for the Kick actresses. She said, “She is a positive person. She is always happy. I don’t think anybody can really end up fighting with her,” she added.

Meanwhile, this actress has also been pacifying the leading actor of Judwaa 2, who seems to be under tremendous pressure for stepping into Salman Khan’s shoes. “I understand that he is stepping into Salman Khan’s shoes, who is still working. So the poor boy (Varun) is under stress. So I keep reminding him to enjoy. In fact I feel he just wants to take stress every day!” she laughs.